A major regeneration programme in south-east Edmonton, planned to create 10,000 mixed-tenure homes and thousands of jobs, at a cost of around £6bn 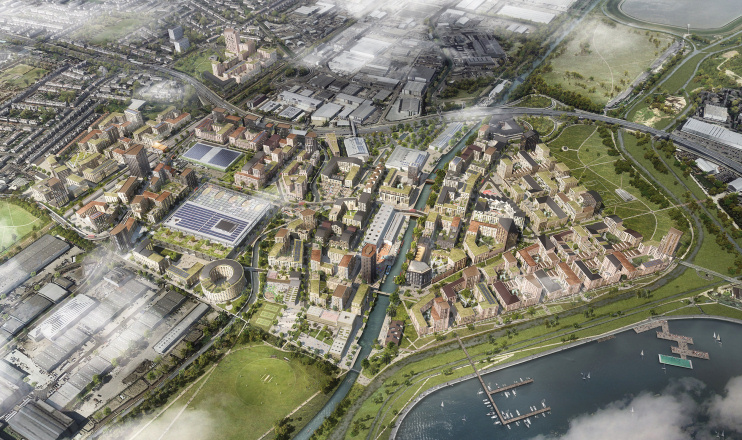 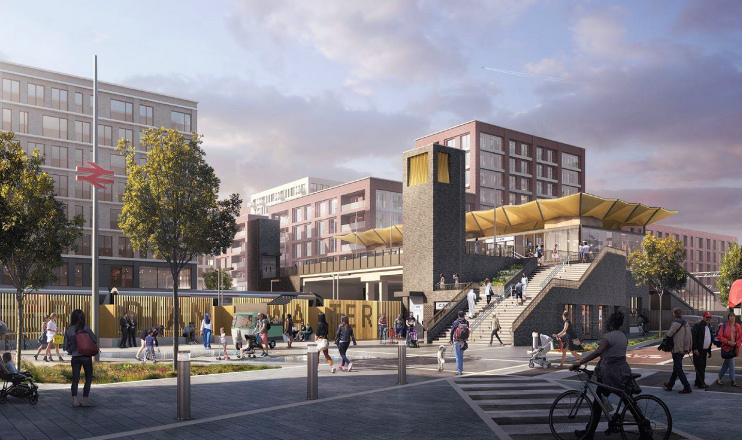 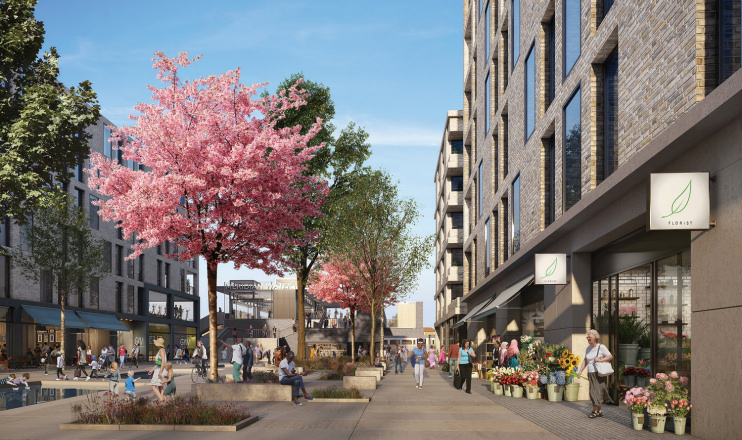 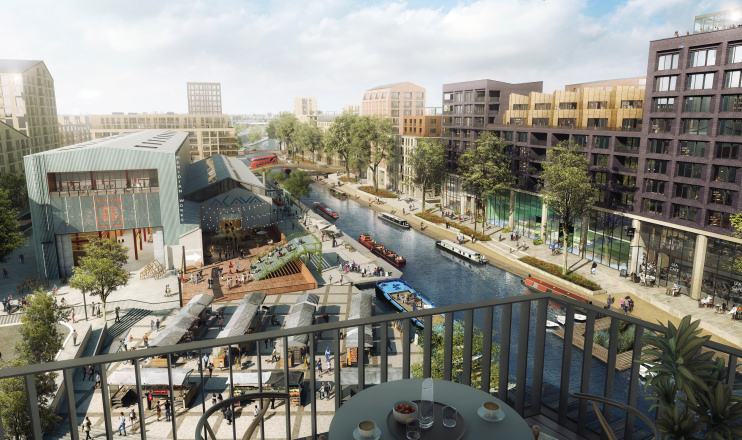 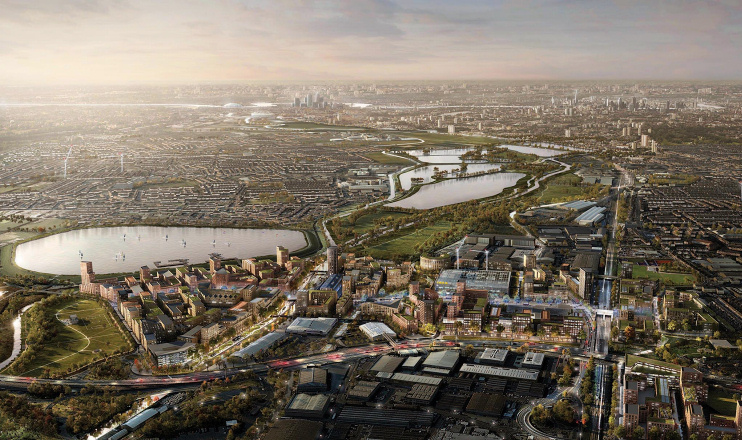 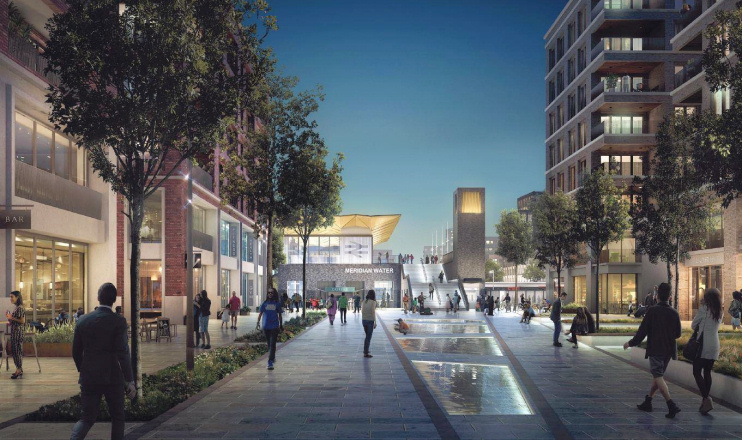 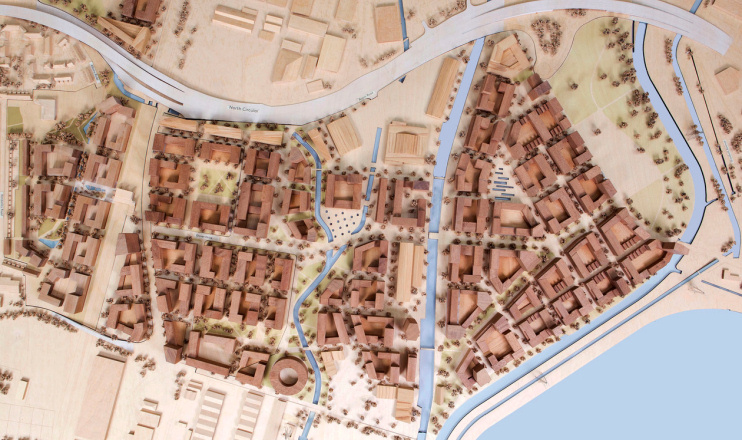 In the Middle Ages much of this area formed part of the manor of Willough­bies. The medieval manor house seems to have stood on a site now occupied by Kimberley Road. By 1619, however, a new manor house had been built just inside Tottenham parish. The old house had a moat, which survived until around the end of the 19th century.

To the east the land consisted of marshy meadows and pasture, divided into fields in 1804 following the Edmonton Inclosure Act of 1800. The principal farm was called Dyson’s and its farmhouse stood near the northern end of what is now Dysons Road.

The railway came through the fields in 1840, when Edmonton (later Angel Road) station opened.

Tottenham and Edmonton gasworks opened on the west side of the railway line in 1847. Fifty years later a factory called the Gothic Works was built east of the railway line. It was shared by two firms, one making gas meters, the other gas stoves. The pair later amal­ga­mated and were ulti­mately taken over by Thorn Elec­trical Industries.

In 1901 a soda syphon factory opened on a three-acre site between Pymmes and Salmons Brooks. Vacant sites nearby were for a while occupied by allot­ments, a bowling green, tennis courts and other amenities, before these were progres­sively eased out by other indus­trial units attracted by the low price of land.

Meridian Way (A1055) was built in the early 1990s, partly to improve north-south access for commer­cial vehicles to the many indus­trial estates beside the Lee Navigation.

By the turn of the millen­nium most of the brookside factories were closing down or relo­cating and they were replaced by retail and wholesale ware­houses and distri­b­u­tion depots. Trading estates (later called a ‘business park’) also filled the zone between the Lee Navi­ga­tion and the River Lea.

In 2005 Ikea opened a super­store on the former site of the Gothic Works, on Glover Drive, with intro­duc­tory offers that sparked a ‘riot’.

Around 2007 Enfield council began to formulate regen­er­a­tion plans for the area then referred to as Central Leeside. Over the next few years the plans became ever more ambitious until, by 2015, a total trans­for­ma­tion was envisaged, with over 200 acres of homes, parks and commer­cial premises comprising a new neigh­bour­hood (almost a whole new town) to be called Meridian Water.

Following a compe­ti­tion, the archi­tects Karaku­sevic Carson were appointed by the council to produce a master­plan for the site. Their computer generated images appear in the slideshow above. A key feature of the master­plan is a central spine — ‘the Causeway’ — which will run east-west across Meridian Water, though its precise route has yet to be finalised. Two repur­posed indus­trial sheds adjacent to the Lee Navi­ga­tion would become Meridian Works (shown in one of the slides), providing workspace for 500 makers, sculptors and artists.

Highly unusually, Enfield council bought up the necessary sites before leasing them to private devel­opers. A setback occurred in late 2017 when preferred bidder Barratt Devel­op­ments withdrew from the scheme, following the council’s refusal to accept their proposed terms. A depend­able replace­ment partner proved hard to find.

Infra­struc­ture devel­op­ment and enabling works have continued and Meridian Water station opened on 3 June 2019. However, an air of uncer­tainty began to descend over the project as a conse­quence of several factors, including the preferred partner predica­ment, central govern­ment funding cuts and the mayor of London’s draft London Plan, which has led to a planning inspector’s ruling restricting the number of homes that can be built on the part of the site desig­nated as strategic indus­trial land.

In July 2018 a second devel­op­ment partner announced it was pulling out and Enfield council said it no longer intended to work with a single master developer for the site. In April 2019 the council appointed Galliford Try to deliver the first phase of the scheme, which will consist of 725 homes, up to half of which will be classed as affordable.

In March 2022 Enfield council acknowl­edged that it expects to deliver only half of its 10,000 homes target for Meridian Water before 2039.

When Ikea announced its intention to close the Glover Drive store in 2022 the Enfield Dispatch commented: “With [London mayor Sadiq] Khan reluctant to allow many of the Meridian Water indus­trial sites to be reclas­si­fied for housing, the closure of Ikea could provide a fresh oppor­tu­nity for the council to acquire the land it needs to meet its target. A previous master­plan for Meridian Water assumed that Ikea would still be operating at the site.”