Crouch End’s name is of Middle English origin, an ‘end’ being an outlying place, while a ‘crouch’ was a cross, which may have been placed here as a boundary post between two manors.

During the late 18th century the village took shape as a congre­ga­tion of labourers’ cottages, though there were grander houses in the vicinity – two of which were later acquired by the Booths, the gin distilling family.

The Hornsey enclosure award of 1813 prompted a gradual programme of house­building that accel­er­ated rapidly after the opening of Crouch Hill and Crouch End stations in the late 1860s. The latter has since closed and its disused line has become the Parkland Walk that traverses the district.

During the 1870s and 1880s Crouch End was entirely built over, with pressure from local worthies ensuring a high standard of construc­tion. Civic pride shows in Crouch End’s landmark, a clock­tower erected by public subscrip­tion in 1895.

Hornsey town hall was built on the Broadway in 1935 and bears a resem­blance to Tate Modern (which began its life as a power station).

A few post-war office blocks have marred its homo­geneity, but Crouch End remains one of London’s lovelier suburbs, with an eclectic selection of shops and restau­rants in the streets converging on the Broadway.

Hornsey College of Art, attended by the Kinks’ frontman Ray Davies, later became the TUC College. Since 2008 the building has formed part of Coleridge primary school.

Early in the 21st century the old telephone exchange was replaced by an apartment complex with a fitness centre and a Marks and Spencer food store at street level.

Haringey council declared Hornsey town hall surplus to its require­ments in 2003 and it lay empty for several years after­wards. The Mountview Academy of Theatre Arts hoped to move in but its plan failed to come to fruition (and it relocated to Peckham instead), and the council ulti­mately decided that a small arts centre was the best they could hope for, while the rest of the building and its curtilage would become a private resi­den­tial and hotel devel­op­ment, part of which is shown in the devel­opers’ CGI below. The project is due for comple­tion in autumn 2021. 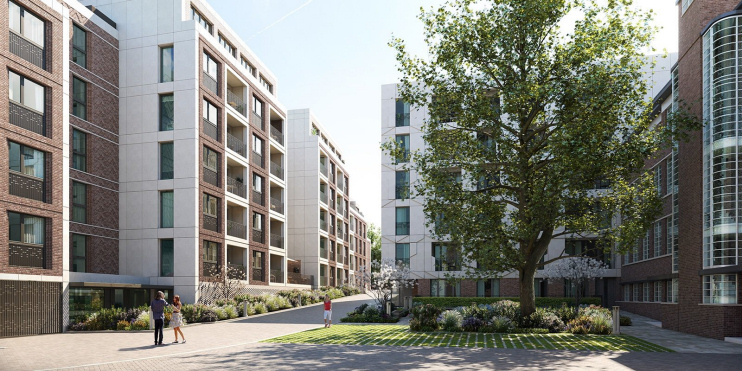 Despite its outward gentility, Crouch End – according to Stephen King’s short story of that name – hides a gateway to a nightmarish parallel dimension behind its “elderly brick houses like sleepy dowagers.” The story has been republished in the collection Nightmares and Dreamscapes.

* The picture of Middle Lane, Crouch End, at the top of this page is adapted from an original photograph, copyright Julian Osley, at Geograph Britain and Ireland, made available under the Attribution-ShareAlike 2.0 Generic Licence. Any subsequent reuse is hereby freely permitted under the terms of that licence.