A socially disadvantaged ward and diverse market street, situated on the west side of Lisson Grove 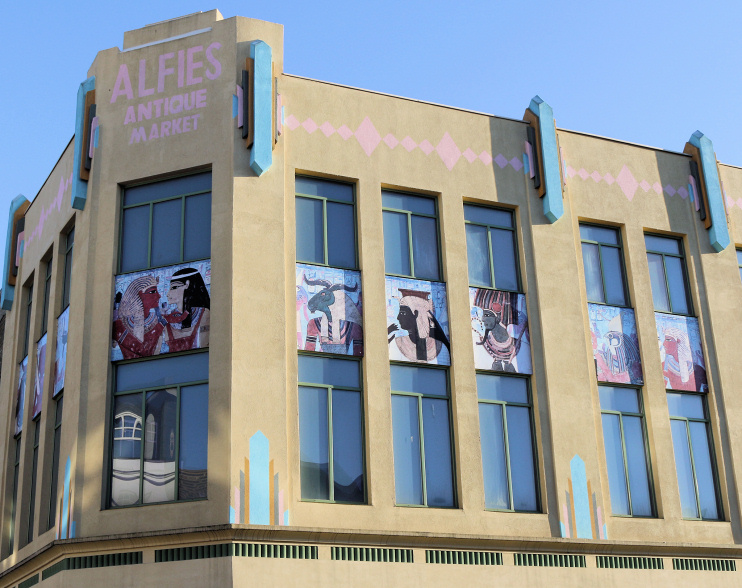 Church Street was created in the 1790s as part of the devel­op­ment of Lisson Green, and ran west towards the parish church at Paddington Green. A hay market opened on a three-acre site on the north side of Church Street in 1830, adding vegeta­bles and general goods a year later. A grand collec­tion of buildings was named Portman Market after Sir William Portman, who had owned much of the manor in the latter half of the 16th century.

Better-off folk came to the market from further afield, including Mary Ann Evans, otherwise known as the writer George Eliot, who shopped every week at the post office and grocers. However, hopes that the market would rival Covent Garden were never realised, despite a recon­struc­tion scheme in 1900. The site was sold in 1906 and became a vehicle main­te­nance depot. Traders soon set up their stalls on the street instead.

The neigh­bour­hood was badly damaged during the Blitz and the old market site was rede­vel­oped as part of the Church Street estate after the war.

More council flats filled the street’s hinter­land in the following decades, some contro­ver­sially replacing prop­er­ties that could have been restored.

From the 1960s, trade in antiques and bric-à-brac flour­ished on Church Street. Alfies antique market opened in 1976 in the former Jordan’s depart­ment store and is now home to around 70 dealers.

Around the corner on Gateforth Street is the Cockpit – a little theatre with a differ­ence. It’s part of City of West­min­ster College. The college’s Paddington Green campus is located at the far south-west end of Church Street.

The Church Street ward is ethni­cally diverse, with a large Muslim minority, many of whom are of Arabic origin. The majority of homes are rented from the council or a social landlord, and 68 per cent of house­holds – a very high propor­tion – have no car.

West of the Edgware Road and south of Church Street a different world is taking shape – as shown in the devel­op­er’s CGI above. West End Gate is a high-class neigh­bour­hood created by Berkeley Homes, with a 30-storey tower and a cluster of apartment blocks designed in a red-bricked style that’s intended to “evoke the period charm of its Maida Vale neigh­bour­hood and nearby Mayfair,” according to a sponsored article in the South China Morning Post. The scheme also includes office space on Church Street. At the time of writing the satellite view below still shows the car park and car wash that occupied most of this underused site for the previous 25 years.

After his supposed death at the Reichenbach Falls, Sherlock Holmes first reappears to Dr Watson disguised as a Church Street bookseller in ‘The Adventure of the Empty House’.

* The picture of Alfies Antique Market at the top of this page is slightly modified from an original photograph, copyright eilidh_wag, at Flickr, made available under the Attribution 2.0 Generic licence. Any subsequent reuse is hereby freely permitted under the terms of that licence.