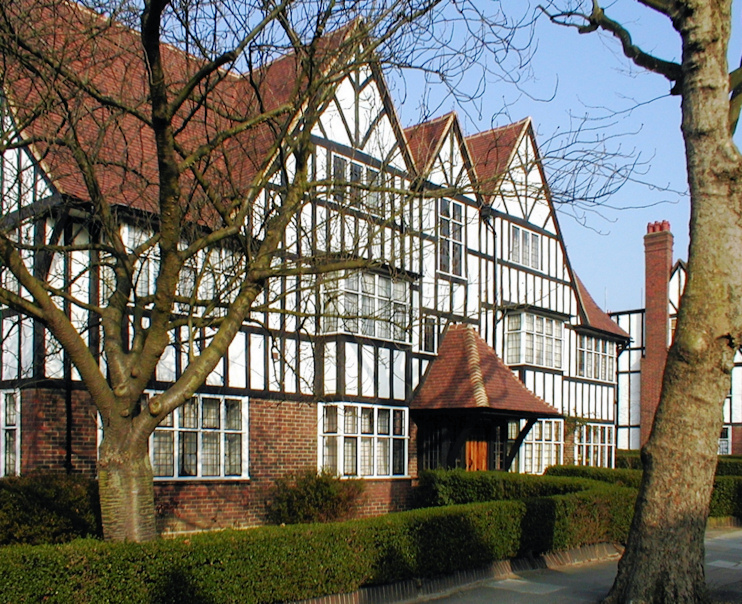 ‘Hanger’ meant a wood on the side of a hill or bank. Hanger Hill House, built in 1790, was the home of local landowners the Wood family until 1874.

In the early years of the 20th century, the mansion became a golf clubhouse, while the adjoining fields were colonised by Acton Aerodrome and the manu­fac­turing facil­i­ties of the Alliance Aeroplane Company. With the coming of the Western Avenue the land was acquired for devel­op­ment and the Hanger Hill garden estate was laid out between 1928 and 1936.

Consisting of short terraces of houses and three-storey blocks of flats, all in mock-Tudor style, the devel­op­ment is char­ac­terised by lovely gardens and vistas.

The neigh­bouring Haymills estate is remark­able amongst London suburbs of the 1930s for the large number of buildings designed by a single archi­tec­tural practice, in a series of concen­tric crescents.

Ealing council created a Hanger Hill electoral ward in 1999 in a move described as “uniting the whole Hanger Hill community in one ward for the first time.”

Ethni­cally, the ward is two-thirds white and the main minori­ties are of Indian and Japanese origin. After Chris­tianity, the principal religions are Islam, Hinduism and Buddhism. Just over half the 16 to 74-year-olds are univer­sity educated. More than a quarter of the prop­er­ties are privately rented.

Hanger Hill Park includes a fragment of oak woodland to the west, now a nature reserve.