An ‘exceptional example of a complete Edwardian suburb’, as Haringey council rightly calls it, situated north-west of its original parent, Hornsey 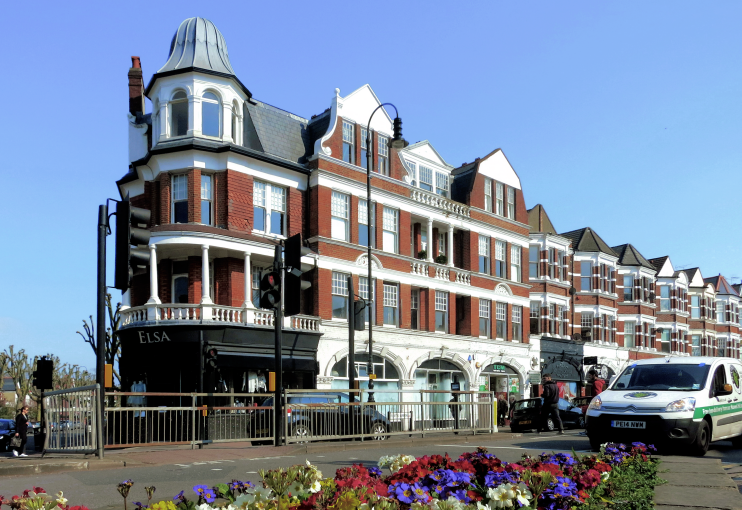 The topo­graphic feature from which the district takes its name is now surmounted by the Alexandra Palace. ‘Muswell’ is a corrup­tion of ‘mossy well’ and there was a spring here that was reputed to have restored the health of Malcolm IV of Scotland.

Sixty-four acres of the manor of Hornsey were given to the nunnery of St Mary, Clerken­well, in 1152 for use as a dairy farm. The sisters also main­tained a small chapel here and pilgrims visited the health-giving well. The vestry of Clerkenwell’s St James’s church acquired the priory’s farmland after the disso­lu­tion of the monasteries.

Following the Hornsey enclosure award, which took effect in 1816, sedate villas began to appear and the growth of the village led to the building of St James church in 1842. However, the relative inac­ces­si­bility of Muswell Hill (which persists to this day) protected it from the first wave of suburban devel­op­ment that washed across north London in the mid-19th century.

Neither the opening of Alexandra Palace nor a half-hearted railway connec­tion signif­i­cantly disturbed the semi-rural serenity, partly because some of the village remained under Clerkenwell’s juris­dic­tion until the end of the century.

The termi­na­tion of this anomaly, combined with the sale of several grand houses and their spacious grounds, resulted in the compre­hen­sive trans­for­ma­tion of Muswell Hill in the 20 years from 1895. Just two building firms were respon­sible for almost all the work – which helped endow the suburb with an uncom­monly harmo­nious appearance.

To cope with the growth in the district’s popu­la­tion, a larger St James was built in 1900–2, with the tower and spire following in 1910.

The Ritz and Odeon cinemas both opened in 1936. St James – ‘the Church on the Hill’ – was gutted by incen­diary bombs in 1941 and it was eleven years before its restora­tion was completed.

The Ritz (later the ABC) closed in 1978 and was imme­di­ately demol­ished and replaced by an office block.

The Odeon survived a proposal to replace it with a super­market in 1981 and was after­wards grade II* listed to prevent similar attempts in future. It is now an Everyman.

Some shops and street furniture were inap­pro­pri­ately modernised late in the 20th century and the council has been working with conser­va­tion groups to try to restore lost or damaged features.

With its high property prices, Muswell Hill’s inhab­i­tants tend to be aged over 30 and qualified to degree level or higher. And the retailers, cafés and restau­rants – many of them inde­pen­dent – are mostly as refined as one might expect.

Historical residents of interest, if only for their names, include a 17th-century Master of the Rolls called Sir Julius Caesar and the 18th-century bon viveur Topham Beauclerk and his wife, the former Lady Diana Spencer.

Muswell Hill, Torben Betts’s dramatic comedy of acute social embarrassment, premiered across the other side of London at Richmond’s Orange Tree theatre in 2012.

* The picture of Queens Mansions at the top of this page is adapted from an original photograph, copyright Des Blenkinsopp, at Geograph Britain and Ireland, made available under the Attribution-ShareAlike 2.0 Generic Licence. Any subsequent reuse is hereby freely permitted under the terms of that licence.