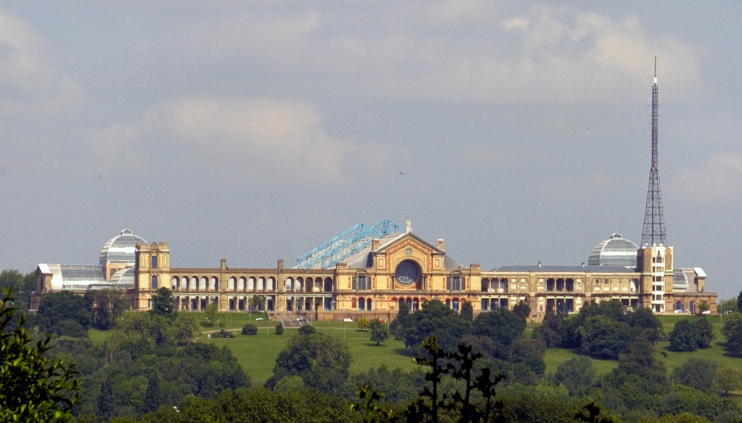 At the end of the 1850s the Great Northern Railway Company opened Wood Green (now Alexandra Palace) station and the Great Northern Palace Company acquired Tottenham Wood Farm. The latter company opened a pleasure garden and then reused materials from the inter­na­tional exhi­bi­tion held at South Kens­ington in 1862 to build the first Alexandra Palace. A railway branch line connected the palace with Highgate station on Archway Road.

Nicknamed ‘Ally Pally’, the exhi­bi­tion hall burned down within days of its inau­gu­ra­tion in 1873. A new palace opened two years later, with more emphasis on cultural and educa­tional facil­i­ties than some of the showier exhi­bi­tion halls built elsewhere at that time. Perhaps because of this, the venue was almost contin­u­ously beset by financial diffi­cul­ties and a consor­tium of local author­i­ties had to step in and rescue it in 1901.

Alexandra Palace served as a prisoner of war camp in the First World War and the BBC trans­mitted the world’s first public tele­vi­sion broad­casts from a studio here in 1936. The palace’s dedicated railway line closed in 1954.

The Greater London Council managed the site from 1966 and passed control to the London Borough of Haringey in 1980, whereupon half the palace was again ruined by fire. Part of it was restored in 1990 but the rest is still awaiting reno­va­tion. Meanwhile the palace serves as a minor exhi­bi­tion and events centre. It also has an ice rink and a pub, appro­pri­ately named the Phoenix.

In 2015 Alexandra Park and Palace Char­i­table Trust was awarded £18.8million of funding from the Heritage Lottery Fund to restore the palace’s most signif­i­cant historic spaces to their former glory and secure the building’s future as a heritage desti­na­tion. The Alexandra Palace theatre has been repaired and refur­bished – with an ‘arrested decay feel’ (as visible in the photo below) – and a new and more welcoming public entrance hall has been created in the East Court. 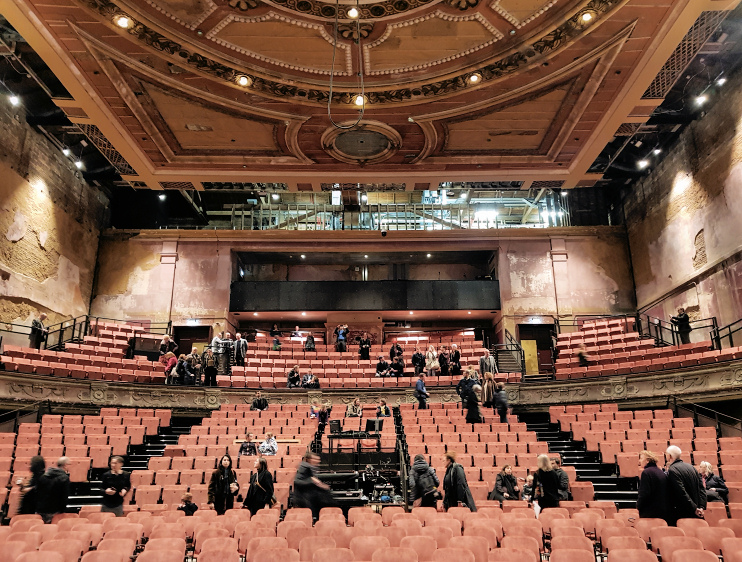 The sight line towards St Paul’s Cathedral from the palace’s viewing terrace is desig­nated a ‘landmark viewing corridor’, which new building must not obstruct. Even trees must be cut back if they grow too tall.

The Alexandra Palace theatre photograph is by Jan Newbigin and is reproduced here with her kind permission.