A rambling, multi-focal village-cum-suburb situated between Edgware and Finchley, and possibly the London district most influenced by the Christian faith 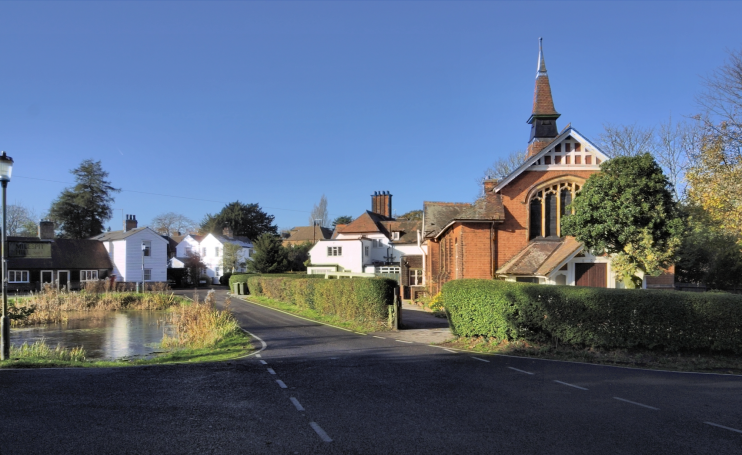 A tradition of religious noncon­for­mity began with Quaker and Pres­by­terian commu­ni­ties in the 17th century. Quakers met at Rosebank, on the Ridgeway, from 1678 to 1719 and the weath­er­boarded building survives today. Across the road, in 1807 a group of Noncon­formist ministers and city merchants founded a Protes­tant dissenters’ grammar school in the former home of botanist Peter Collinson. New buildings were added in 1827 and have been supple­mented by at least one addi­tional structure in almost every decade since.

Mill Hill did not acquire a separate Anglican church from Hendon until 1833 – and that was in the face of bitter oppo­si­tion from the rector of Hendon. Roman Catholics began the construc­tion of St Joseph’s College on Lawrence Street in 1869. This was the second stage of Cardinal Vaughan’s project to create a training estab­lish­ment for foreign mission­aries, begun a few years earlier in nearby Highwood Hill.

In 1887 the Sisters of Charity of St Vincent de Paul acquired Little­ber­ries, a much-altered house of late 17th-century origin on the Ridgeway, and expanded it into a convent. The neigh­bouring St Vincent’s Roman Catholic School opened in 1896. Methodists also built a school on the Ridgeway.

By this time almost one-third of Mill Hill was covered by insti­tu­tional buildings and their grounds – Mill Hill School alone covers 120 acres. This was an obstacle to the expansion of the village, as was its distance from the nearest stations on Bittacy Hill (Mill Hill East) and at what is now Mill Hill Broadway. As a result, most 20th-century devel­op­ment took place in what was virtually a fresh suburb, in the vicinity of the Broadway, and churches were built there as the locality grew.

Back on the Ridgeway, Jehovah’s Witnesses moved to a new national head­quar­ters at Watch­tower House, built on the site of Bittacy House in 1959. The sect now operates here as the Inter­na­tional Bible Students Association.

Despite its history, Chris­tians only made up 39 per cent of Mill Hill’s popu­la­tion at the 2011 census. Jews account for 19 per cent and Muslims 14 per cent.

The University of London observatory is a familiar sight to drivers on the Watford Way. Opened in 1929, the building now houses seven telescopes, a library and teaching space for University College London’s department of physics and astronomy.