The classy northern corner of Mill Hill, with a wealth of historic buildings, formerly known simply as Highwood 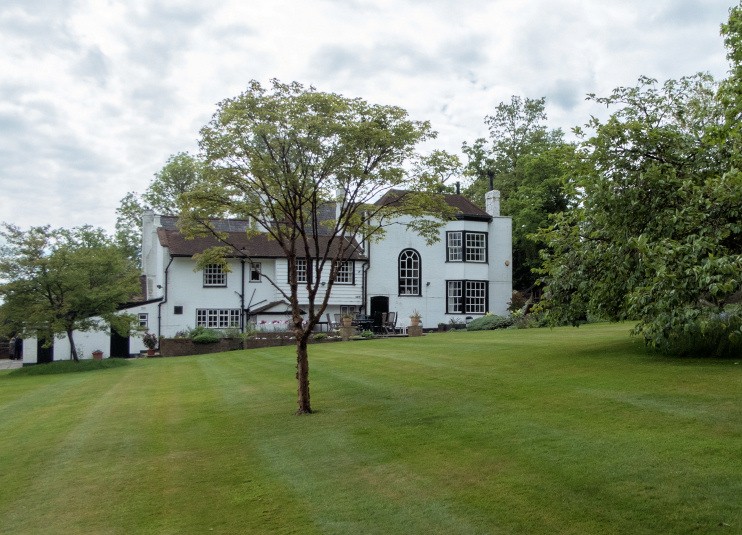 Highwood was first iden­ti­fied sepa­rately from its parent manor of Hendon in the 14th century and became a fash­ion­able country retreat during the 17th and 18th centuries.

From 1713 to 1737 the diarist and traveller Celia Fiennes lived at Highwood Ash, which is shown in the photo above.* Highwood House was bought in 1825 by Sir Stamford Raffles, the founder of Singapore and the London Zoolog­ical Society. He lived here for only a year before he died but Lady Raffles stayed on until her own death in 1858.

An older house on the estate had been the residence of Rachel, Lady Russell, whose husband was executed for conspiring to murder Charles II. The adjacent Hendon Park estate was the 140-acre property of William Wilber­force, the anti-slavery campaigner.

To the south, Holcombe House was built for a City glove merchant in 1778. Herbert (later Cardinal) Vaughan bought the villa in 1866 and started a Catholic missionary college here. The school soon outgrew the premises so Vaughan built St Joseph’s College, which lies to the south-west. Holcombe House then became home to a sister­hood of Fran­ciscan nuns, who also soon moved to larger, purpose-built premises: the neigh­bouring St Mary’s Abbey.

When Holcombe House came back on the market in 1977 it was acquired for the Missionary Institute London, a collab­o­ra­tive under­taking that trains men and women for ministry and missionary work. The institute was affil­i­ated to Middlesex Univer­sity but closed in 2007 as a result of declining student numbers.

St Mary’s Abbey has been converted into a luxury apartment complex called Highwoods, and the Fran­ciscan sisters have moved into a new lodge next door.

The more conven­tional – but still grand – houses of Highwood Hill mostly date from various decades of the 20th century, espe­cially the 1930s. The Rising Sun was converted to its present use in 1751 from a 17th-century cottage. The pub is grade II listed.

Created over the last fifty years, the 3¼ acre garden at Highwood Ash is occa­sion­ally opened to the public to raise funds for the North London Hospice.

Highwood Park House, on Nan Clark’s Lane, doubled as a Mediterranean villa in various 1960s TV series and featured in episodes of Morse and Jonathan Creek in the 1990s. The lane is supposedly named after a local barmaid who was drowned in the pond by her jealous husband, but Hidden London suspects this story is not true. “They say her ghost appears once a year,” comments Diamond Geezer, “which must set off all the security lights in the luxury boltholes that now line the lane.”

* The picture of Highwood Ash at the top of this page is adapted from an original photograph, copyright Christine Matthews, at Geograph Britain and Ireland, made available under the Attribution-ShareAlike 2.0 Generic Licence. Any subsequent reuse is freely permitted under the terms of that licence.