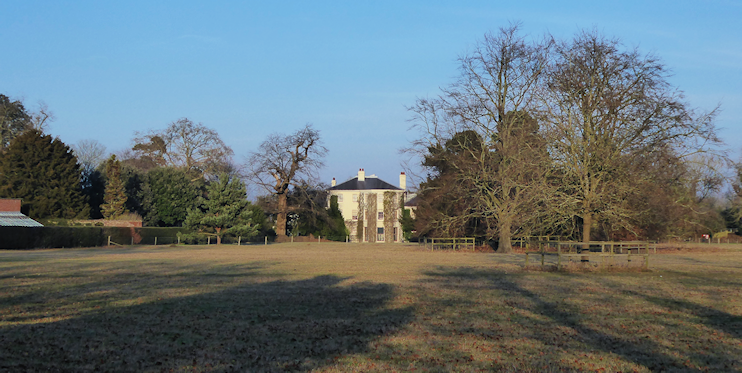 The village’s name was first recorded in 1283 and derives from the Old English dun, a hill. It was often spelt ‘Down’ and it has been claimed that the Post Office encour­aged the addition of a super­fluous ‘e’ to avoid confusion with County Down in Ulster.

This is a very scattered village, with weath­er­boarded cottages and brick and flint houses dotted around in all direc­tions but espe­cially to the south. A chapel was built in 1291 and may have stood on the site of St Mary’s church. The fabric of the present church dates primarily from the 16th century.

Downe Court was built in 1690 on the site of an earlier manor house, which was probably surrounded by a moat. English Heritage has placed Downe Court on its register of buildings at risk because it is “starting to show the effects of long term neglect.” On Luxted Road, a handsome house called Petleys was built in the early 18th century and later became a home of the Wedgwood pottery family.

In 1842 Josiah Wedgwood’s daughter Emma came to live at Down House, a former parsonage at the southern end of the village, with her husband Charles Darwin. In his (posthu­mously published) auto­bi­og­raphy Darwin recalled his satis­fac­tion with his new home:

“After several fruitless searches in Surrey and elsewhere, we found this house and purchased it. I was pleased with the diver­si­fied appear­ance of vege­ta­tion proper to a chalk district, and so unlike what I had been accus­tomed to in the Midland counties; and still more pleased with the extreme quietness and rusticity of the place. It is not, however, quite so retired a place as a writer in a German peri­od­ical makes it, who says that my house can be approached only by a mule-track!”

The great scientist took a daily stroll around a circuit of the grounds known as the ‘Sandwalk’, set up a labo­ra­tory in a brick hut and culti­vated orchids in the green­house. Darwin lived at Down House until his death in 1882 and he wrote all his most important works here, including The Origin of Species.

Downe remained a farming village into the 20th century, producing fruit and vegeta­bles for the London markets. With its isolated location, the village attracted walkers and cyclists to its tearooms and pubs. Down House became a Darwin museum in 1929 and was acquired by English Heritage in 1996.

Darwin’s study, where he did most of his writing and micro­scope work, has been recreated from photographs. Crammed with books, files and specimens, its amenities included a spittoon and a discreetly curtained privy. Modern educa­tional displays fill the rooms of the first floor.

To the south-east of the house is Downe Bank – or Orchis Bank, as Darwin knew it. Now a Kent Wildlife Trust property, the wood is rich in orchids and provides one of Britain’s best displays of bluebells in spring.

In 2009 the govern­ment nominated Down House and the surrounding area in which Darwin walked and thought as a world heritage site that it called ‘Darwin’s Labo­ra­tory’. As the Depart­ment for Culture, Media and Sport (DCMS) pointed out: “Few prop­er­ties and their environs can claim to have been as central to the life and work of one person as Down House.” Unesco’s world heritage committee rejected the bid but it appears that the DCMS intends to keep trying in future years.

Down House is located near the bottom of the map below. Please zoom (and drag) the map to see a detailed plan of the grounds, including the route of the Sandwalk.

* The picture of Down House seen across The Great House Meadow at the top of this page is adapted from an original photograph, copyright Marathon, at Geograph Britain and Ireland, made available under the Attribution-ShareAlike 2.0 Generic Licence. Any subsequent reuse is hereby freely permitted under the terms of that licence.