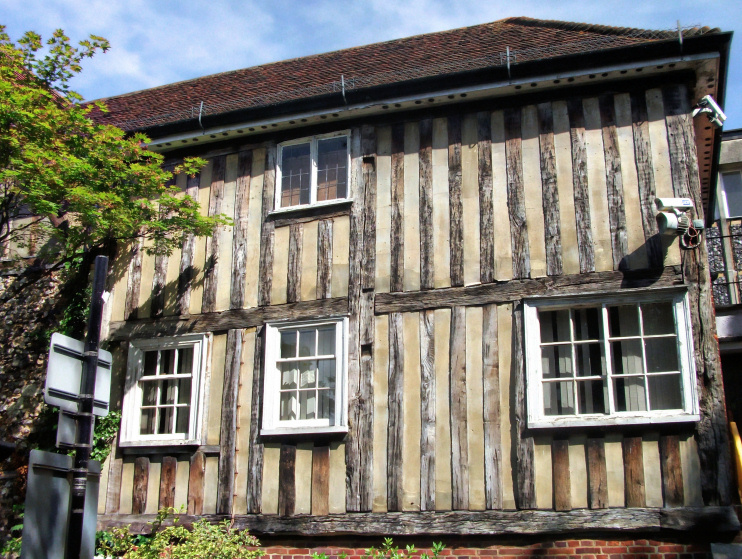 This place was first recorded in 1032 as Orped­ingtun – the farmstead of a man called Orped, a name that meant ‘active’ or ‘bold’.

All Saints’ church is of Saxon origin and has a sundial inscribed in runes. The church was remod­elled around 1200 and a priory was built nearby before 1270. Shown in the photo above, the priory was enlarged and improved in the following two centuries and served both as a residence for the rector and chaplains and as an overnight stop for the priors of Canter­bury Cathedral.

Orpington and St Mary Cray rivalled each other for local ascen­dancy from the late Middle Ages but neither developed signif­i­cantly until the 19th century.

The opening of Orpington station in 1868 brought some early devel­op­ment to Crofton and Broom Hill and rebuilding on the High Street, while Orpington New Town was laid out on the edge of Derry Downs.

Until the end of the 19th century an annual fair was held on White Hart Meadow. At this fair William Cook, a poultry breeder who lived at Waldon Manor, developed and first presented ‘Orpington Buff’ chickens in 1894. They rapidly gained popu­larity as an excellent meat bird but lost out as the commer­cial roaster market developed, partly because of their exces­sively pale skin.

With the provision of a larger station and improved rail services in 1904, devel­opers began to buy up land east of the railway and true subur­ban­i­sa­tion was under way by the outbreak of the First World War. During the war the Canadian province of Ontario funded the construc­tion of a military hospital that later became Orpington hospital.

House­building reached a crescendo in the late 1920s and 1930s, with winding tree-lined streets laid out in all direc­tions. After the Second World War the suburb expanded to meet neigh­bouring villages and a large council estate was built (and has recently been rebuilt) on the edge of the green belt at Ramsden.

A much larger All Saints’ church was conse­crated in the late 1950s, with the medieval church effec­tively becoming its ante-chapel, while the priory was attached to a new library.

Many of the Victorian shops on the High Street were lost in the early 1970s during the building of the Walnuts shopping centre, together with offices, a further education college (now a campus of London South East Colleges) and a police station. Behind the mall, the Walnuts leisure centre has swimming pools, sports courts and other facil­i­ties. The photo below shows the High Street on 6 November 2017, with its trees bedecked with poppies in prepa­ra­tion for Remem­brance Sunday the following weekend. 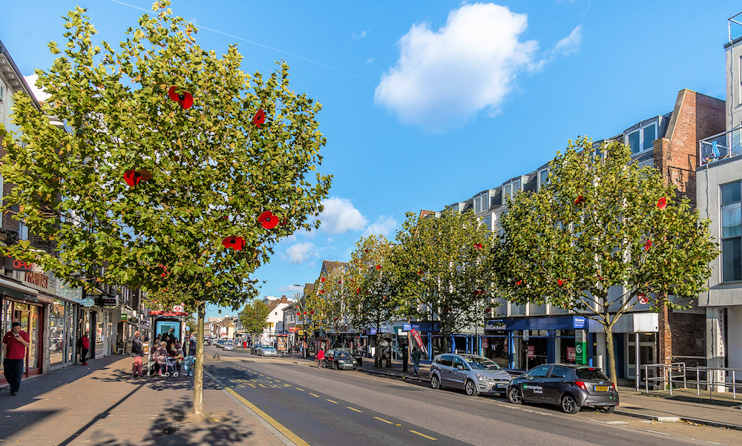 Except on its far eastern side, this district is the epitome of comfort­able suburbia, and its prime attrac­tion is Orpington Priory and its gardens. Bromley council (not a body that likes to have anything to do with heritage) offloaded the priory to the art organ­i­sa­tion V22 in November 2016.

In the days before tactical voting became commonplace, Orpington was the scene of a sensational by-election victory for the Liberals in 1962 when Eric Lubbock took the seat with a 27 per cent swing.