One of the few Victorian developments in the Cray valley, located on the edge of the green belt south-east of St Mary Cray 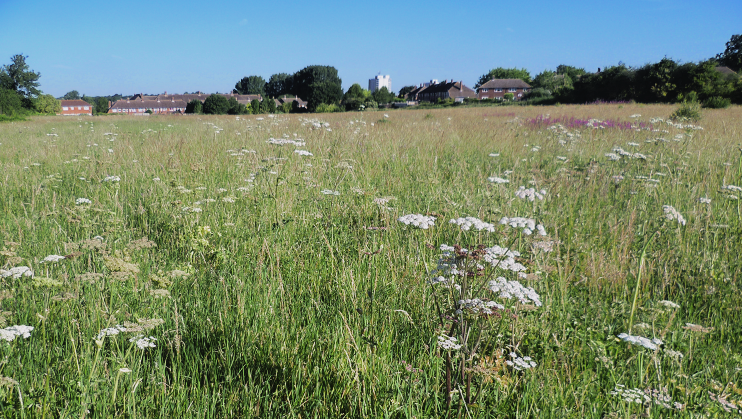 There seems to be no record of Derry Downs’ name before the second half of the 19th century, nor an expla­na­tion of its deriva­tion. Perhaps Derry was the name of a local resident, but there may alter­na­tively (or also) be a link with the use of the words ‘derry down’ as a mean­ing­less refrain in old ballads and folk songs.

Nowadays, the fields north of Cock­man­nings Road (shown in the photo above) are sometimes called Derry Downs, but Hidden London believes this is essen­tially a mistake – a misreading of the map, which is (or should be) iden­ti­fying the adjacent built-up locality as Derry Downs, not the farmland. This 1930s Ordnance Survey map shows how the ‘Derry Downs’ label used to be applied:

However, so many modern maps are ‘mistak­enly’ plonking Derry Downs’ name in the middle of the neigh­bouring fields that was once wrong may rapidly be becoming the way it has to be.

The quad­ran­gular road called Derry Downs was laid out in 1866 and it was gradually lined with houses (or pairs of houses) over a period of several decades, including some substan­tial villas.

This was a piecemeal project, with plots sold sepa­rately and each house designed indi­vid­u­ally. London stock brick was the favoured building material, sometimes embell­ished with stucco.

Rutland Way was laid out before the Second World War and Rosecroft Close was lined with rela­tively spacious semi-detached houses and a few bungalows in the 1950s. Both these roads replaced nurseries.

Rosecroft Close is named after the house that stands at the corner of Chels­field Road and High Street, St Mary Cray.

Derry Downs’ character was marred by pervasive rebuilding, infilling and extending during the second half of the 20th century but several Victorian prop­er­ties have survived, one of which is now Derry Downs surgery.

South of Chels­field Road at its (Grigg’s Cross) junction with Cock­man­nings Road, the Grass­meade estate was built in the mid-1960s and its streets were named after airmen who died in the Battle of Britain. Neigh­bouring Kille­warren Way and its offshoots were laid out on what had been the home ground of Cray Wanderers football club until 1972.

The Cock­man­nings estate, jutting into pig-rearing country further to the south-east, takes its name from a house once owned by the Manning family, lords of the manor of Kevington, and from the cockpit in its grounds.

The typical Derry Downs resident is a 46-year-old, married, middle-class, white British homeowner, with at least one car.

In 1897 William Cook, the breeder of Orpington black and buff chickens, lent his eldest son the money to buy Elm Cottage (now Elmdene, 51 Derry Downs). Cook’s son appears to have started up a competitive poultry farm here, and the two fell out.

* The picture entitled On Derry Downs at the top of this page is adapted from an original photograph, copyright Marathon, at Geograph Britain and Ireland, made available under the Attribution-ShareAlike 2.0 Generic Licence. Any subsequent reuse is freely permitted under the terms of that licence.