A multi-ethnic residential district situated between Neasden and Cricklewood, at one time known as Dollar’s Hill 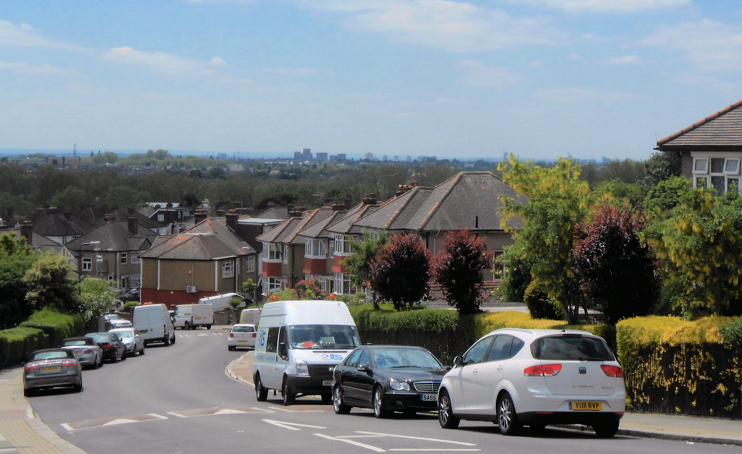 The Dollis Hill name may be of 16th-century origin, and connected with a family called Dalley. Surpris­ingly, the etymology of nearby Dollis Brook may not be the same, although the spellings have converged owing to their geograph­ical and ortho­graph­ical proximity.

The 96-acre Gladstone Park, created in 1901, dominates the district. The park was once the grounds of Dollis Hill House, built in the early 19th century and frequently visited by Gladstone when Lord Aberdeen owned it. Mark Twain spent the summer here in 1900, writing that, “From the house you can see little but spacious stretches of hay-fields and green turf … Yet the massed, brick blocks of London are reachable in three minutes on a horse.”

Most of Dollis Hill’s undu­lating meadows were oblit­er­ated by suburban house-building before and after the First World War and this was an early place of migration for Jewish Londoners moving out of the East End. The progres­sively designed concrete synagogue opened in 1938. It is now in use as a school.

In 1934 the Post Office Engi­neering research station opened in Brook Road. Two War Cabinet meetings were held in the bomb-proofed basement of an outbuilding here and Winston Churchill briefly retained a flat at nearby Neville’s Court. The research station was the British base of the ‘innocent’ in Ian McEwan’s novel of that name. In the mid-1990s the property was sold to a developer who converted the main building into luxury flats and built a new housing estate on the rest of the site.

Dollis Hill House was badly damaged by fire in 1996 and various proposals for its restora­tion never came to fruition. Instead, Brent council demol­ished the building in the winter of 2011-12. The neigh­bouring walled garden is kept in good condition with flower displays changed three times a year, while the house’s stable block has a well-regarded café.

Dollis Hill has a very diverse mix of ethnicities/nationalities, as the table below shows. This includes an unusually large number of Irish residents, many of whom have ‘graduated’ here from districts like Kilburn and Harlesden.

* The picture entitled ‘Looking south from Dollis Hill Lane’ on this page is adapted from an original photograph, copyright Andrew Wilson, at Geograph Britain and Ireland, made available under the Attribution-ShareAlike 2.0 Generic Licence. Any subsequent reuse is freely permitted under the terms of that licence.