Once nicknamed ‘the loneliest village in London’, Neasden is now a characterless suburb sliced in two by the North Circular Road and separated from Wembley by the River Brent 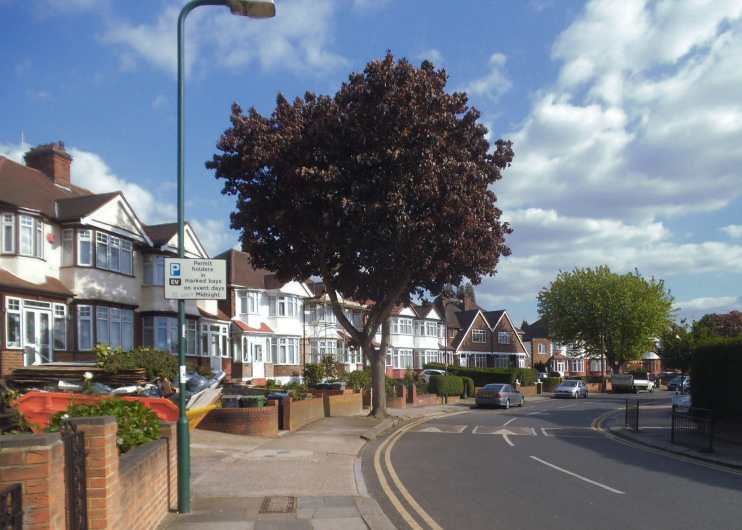 Neasden’s name may have meant ‘nose hill’, a reference to its location on a small promon­tory at the end of the Dollis Hill ridge.

Before the Norman conquest Neasden may have been more important than Willesden but it was no more than a ‘retired hamlet’ when enclosure was completed in 1823. At this time there were six cottages, four larger houses or farms, a public house and a smithy, grouped around the green. The dwellings included The Grove, which had been bought by a London solicitor named James Hall, and its former outbuilding, which Hall had converted into a house that became known as the Grange.

In the 1870s, Neasden remained the most rural part of Willesden, although its housing stock had risen to around 50 and the Spotted Dog inn was attracting London day-trippers.

Until the arrival of the motor car, Neasden’s farms were largely given over to the rearing and stabling of horses. The North Circular Road was built in 1923, and over the next decade massive private housing estates swallowed up almost all the remaining farmland. A shopping centre was completed shortly after­wards and the Ritz cinema opened in 1935.

All of Neasden’s older houses were demol­ished between the wars – except for the Grange – and the Spotted Dog was rebuilt in mock-Tudor style.

A number of houses were sacri­ficed to the enlarge­ment of the North Circular in 1973, which blighted the shopping centre. Super­stores and retail ware­houses have since clustered around the road in the southern part of the district.

In 1995 the far south-west corner of Neasden (down by the Google logo on the map below) became the unlikely home of the biggest Hindu temple outside India: the Shri Swami­narayan Mandir.

Until 2004 the Grange housed the borough’s museum and archive, which has since moved to a purpose-built home in Willesden Green.

The model-turned-actress Twiggy came from Neasden.

In the 1960s and 70s the satirical magazine Private Eye picked on Neasden as a stereotypically bland address for ‘nobodies’ like Sid and Doris Bonkers, who frequently constituted the entire crowd at the home games of (the non-existent) Neasden FC.

David Sutherland’s children’s novel A Black Hole in Neasden reveals a gateway to an alternate universe in a Neasden back garden.

*The picture of Kenwyn Drive at the top of this page is modified from an original photograph at Flickr, copyright David Howard, made available under the Attribution 2.0 Generic licence. Any subsequent reuse is hereby freely permitted under the terms of that licence.