In August 1995 the site of an old warehouse in the south-west corner of Neasden became the unlikely home of the biggest Hindu temple outside India: the Shri Swami­narayan Mandir, popularly known as the Neasden Temple.

The Mandir’s 26,300 pieces were carved in India from Bulgarian limestone and Italian marble, shipped to London and assembled in under three years by over a thousand volun­teers. The materials were specif­i­cally selected to be durable enough to withstand British weather condi­tions. No metals were used as Hindus believe that metal inter­feres with the mental efforts needed for medi­ta­tion and devotion. The temple has the only layered segmental dome in the UK with no steel or lead.

The temple is a popular visitor attrac­tion, open from 9am to 6pm daily, 365 days a year. Admission is free but there’s a small fee to view an Under­standing Hinduism exhi­bi­tion and a video presen­ta­tion explaining how the Mandir was built.

In accor­dance with the sacred purpose of the temple, visitors are asked to abide by various rules of dress (no skirts above knee height, removing shoes on entry) and behaviour, including the main­te­nance of complete silence in the holiest parts of the temple. However, the latter was more honoured in the breach than in the obser­vance by the many school­children the author observed during his visit. No photog­raphy is allowed inside the temple. 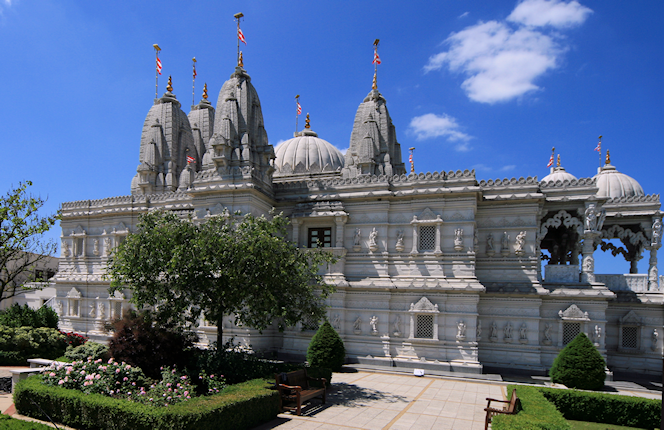