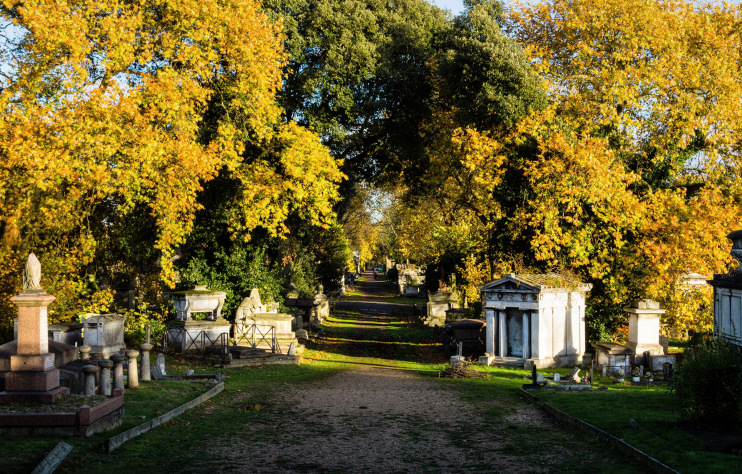 The green itself was enclosed in 1823 and around this time the first suburban cottages and villas were built along Harrow Road. Many survive today.

Surpris­ingly, it was the opening of the cemetery in 1832 that made Kensal Green a fash­ion­able resi­den­tial area. Laid out on 56 acres of land between Harrow Road and Grand Union Canal, Kensal Green was the first of many suburban ceme­teries that were created by joint-stock companies in response to the diffi­cul­ties of finding burial space in central London church­yards. Brunel, Thackeray and Trollope are among those buried here.

Brent’s fast-growing Kensal Green ward is ethni­cally mixed. Just under half the popu­la­tion is white, of whom about half are white British. The most signif­i­cant non-white minori­ties are of black Caribbean, black African and Indian descent. The ward also had more than 1,100 mixed race residents at the 2011 census. Kensal Green has around 8,000 Chris­tians, 2,500 with no religion and 2,100 Muslims.

GK Chesterton’s poem ‘The Rolling English Road’ makes reference to the cemetery in its famous couplet, “For there is good news yet to hear and fine things to be seen / Before we go to Paradise by way of Kensal Green.”

The picture of Kensal Green Cemetery at the top of this page is cropped from an original photograph , copyright Adrian Scottow, at Flickr, made available under the Attribution-ShareAlike 2.0 Generic Licence. Any subsequent reuse is freely permitted under the terms of that licence.