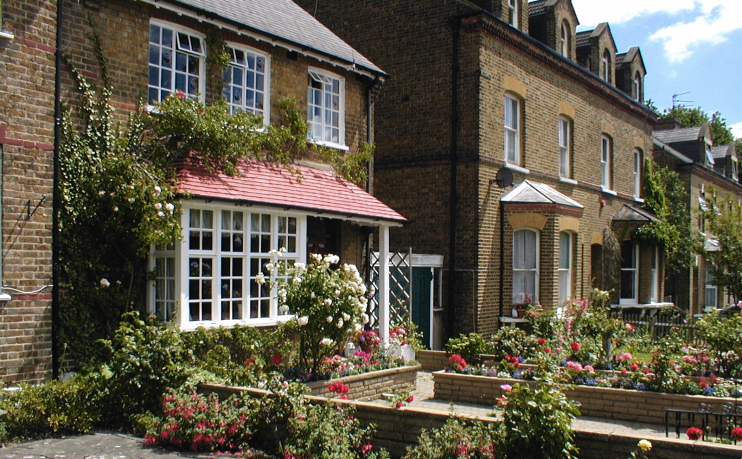 This was part of the virgin territory of Enfield Chase until its enclosure and division in the late 1770s, when much of the land was acquired by Trinity College, Cambridge.

Only one house of note stood here at that time, the sometime home (and perhaps birth­place) of Lord George Gordon, who became notorious as the insti­gator of an anti-Catholic uprising in London in 1780. He led tens of thousands of Protes­tant demon­stra­tors in a march on Parlia­ment that turned into five days of destruc­tive riots even­tu­ally put down by the army. Hundreds of rioters were killed and Gordon was charged with treason, but acquitted.

Gordon House was the residence of Sir Thomas Hallifax, a banker and former Lord Mayor of London, until his death in 1789. In the late 1850s the North London Society bought the house, demol­ished it and laid out streets, but a decade later only a few houses had been built on Halifax Road and Gordon Road.

Services began at the unfin­ished church of St Michael and All Angels in 1874. It was almost 90 years before the church’s west wall and narthex (entrance lobby) were completed. Separate schools for infants, boys and girls were built and later amal­ga­mated on the boys’ school site at the foot of Brigadier Hill.

The North London Society began to extend its estate in the 1880s and built houses on the site of Gordon House in 1894. Gordon Hill station opened in 1910 when the Great Northern Railway line was extended to Cuffley in Hert­ford­shire but the area main­tained a semi-rural aspect until the 1930s.

Several compact apartment blocks have been built in new cul-de-sacs in recent years to capi­talise on the locality’s ‘highly sought after’ status. St George’s RC primary school, on Gordon Road, is regarded as one of the best state schools in London and most of its pupils come from very favourable social and economic backgrounds.