The south-western part of New Barnet, although for a while in the late 19th century the two names were virtually synonymous 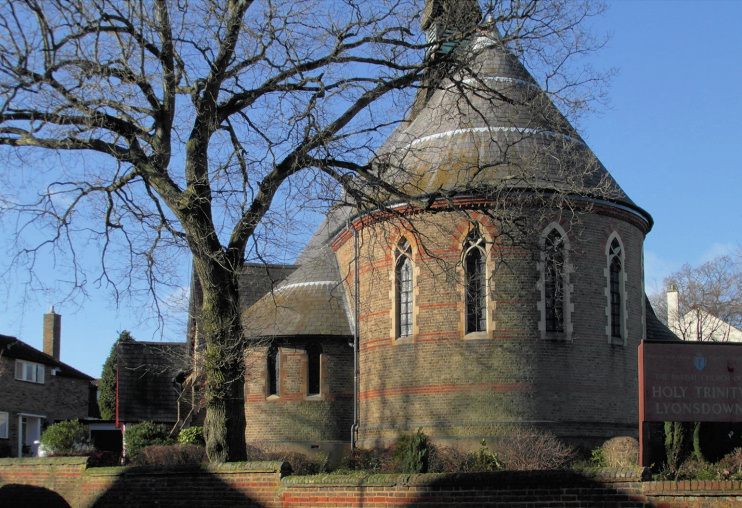 The locality probably takes its name from a former resident and was first iden­ti­fied in an agreement dated 1553, referring to fields and grounds called ‘the Lyon downs’.

Lyonsdown House was acquired in 1810 by Andrew Reid, of the brewery that became Watney Combe Reid, who was later high sheriff of Hert­ford­shire. Reid died here in 1841 and the house was demol­ished in 1862.

Spurred by the proximity of New Barnet station, the British Land Company then laid out the Lyonsdown estate. This was suburban devel­op­ment of the highest class – grand houses with games rooms and wine cellars, sweeping drives and separate side entrances for the servants. No shops were allowed on the estate. Shown in the photo­graph above, the imposing church of the Holy Trinity was built in 1868, near the site of Lyonsdown House. Since those heady times many of the larger prop­er­ties have been replaced or subdi­vided, and the spacious grounds of those that remain have been filled with smaller houses or tasteful blocks of flats.

Lyonsdown school is an inde­pen­dent prepara­tory school estab­lished at its present site in 1906.

Some office blocks have gone up in Lyonsdown Road, which also has Lyonsdown Hall, which hosts meetings of clubs and societies.

The first public demonstration of motion picture projection in Britain was given by local photographer Birt Acres to the Lyonsdown Amateur Photographic Association on 10 January 1896. Four days later Acres repeated the show for the Royal Photographic Society and commercial performances began in Piccadilly in March.

* The picture of Holy Trinity Church, Lyonsdown, on this page is adapted from an original photograph, copyright Ken Amphlett, at Geograph Britain and Ireland, made available under the Attribution-ShareAlike 2.0 Generic Licence. Any subsequent reuse is hereby freely permitted under the terms of that licence.