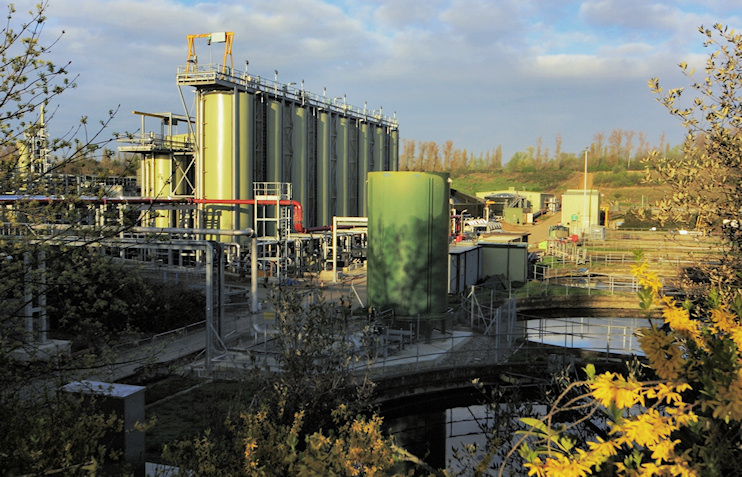 Opened in 1936, the Mogden sewage treatment works is one of the largest such plants in south-east England, treating waste water from a popu­la­tion equiv­a­lent of 1.9 million, across a 60 square mile catchment area of north and west London.

The purified effluent from the plant is piped to Isleworth Ait, where it is discharged into the Thames around high tide. Since the plant’s inception, elec­tricity has been generated from the waste methane to power the treatment works them­selves and in 1993 a combined heat and power plant was added.

An upgrade completed in 2013 has enabled Mogden to treat over 50 per cent more sewage, reducing the amount of storm sewage that flows into the Thames when the site becomes over­loaded during heavy rainfall and helping meet tighter quality standards for the discharged effluent. Thames Water claims the improve­ments will also reduce odours at the site.

The Crane Walk (shown in the small photo) runs through the middle of the Mogden works, beside the Duke of Northumberland’s River, which was diverted as part of the construc­tion programme.

The surrounding locality is rarely called Mogden anymore, either because of the name’s asso­ci­a­tion with sewage or because it was never a very attrac­tive word in the first place. Ivybridge is the preferred identity both for resi­den­tial and commer­cial developments.

Dominated by four mono­lithic tower blocks, the council’s Ivybridge estate is the largest in the borough and has some of its highest levels of deprivation.

The ‘Mogden formula’ is a sewerage industry pricing structure that seeks to link charges to the volume and strength of trade effluent discharged.