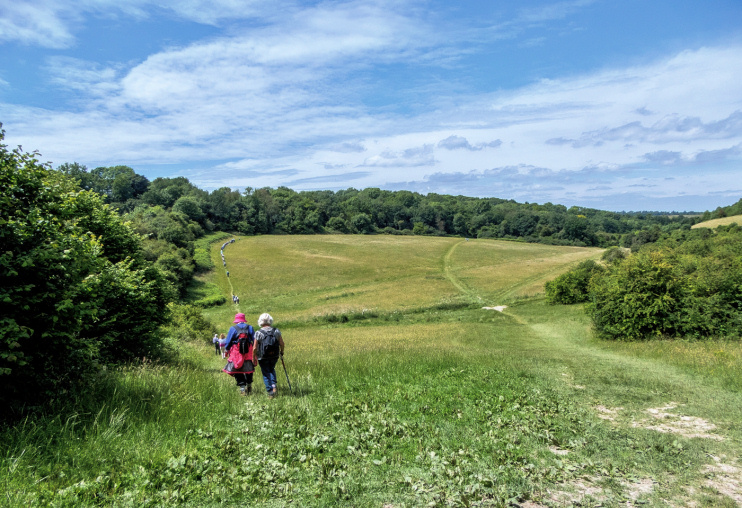 Coulsdon Parsonage was a nine-bay, 18th-century house that served as the rectory for the parish church of St John the Evan­ge­list, which stands half a mile to the north. The parsonage was remod­elled as a private residence in 1841 and the name Parson’s Pightle seems to date from this time. A ‘pightle’ was a croft or small enclosure, but by the 19th century it was an archaic word and there’s no evidence of its previous use at this location. Thus, right from the start, the name may have been chosen purely for its quaintness.

Some of Parson’s Pightle’s grounds have been preserved as part of Happy Valley Park (shown in the photo above), though only a few of the original trees remain here. The house itself was demol­ished in the 1960s during the construc­tion of a small municipal housing estate. (Those were the days when councils merrily knocked down historic houses on a whim.)

One of the estate’s principal avenues is named after the most illus­trious occupant of Parson’s Pightle, Admiral Sir William Good­e­nough, who commanded the Royal Navy’s second light cruiser squadron during the First World War. Good­e­nough died in 1945 and was buried at St John’s church. A footpath at the western edge of the estate is called the Admiral’s Walk.

Lacey Avenue and Lacey Green, the estate’s open space, take their names from medieval landowners who came from Lassy in Normandy. Ellis Road is named after FHB Ellis, who was chairman of Coulsdon and Purley urban district council.

Marked with a pin on the map below, the sports ground on the little lane called Parsons Pightle (spelt without an apos­trophe, regret­tably) is home to Purley John Fisher RFC. The 12th Caterham Scout Group has its head­quar­ters next door.

* The picture of Happy Valley Park on this page is modified from an original photograph, copyright Christine Matthews, at Geograph Britain and Ireland, made available under the Attribution-ShareAlike 2.0 Generic Licence. Any subsequent reuse is freely permitted under the terms of that licence.