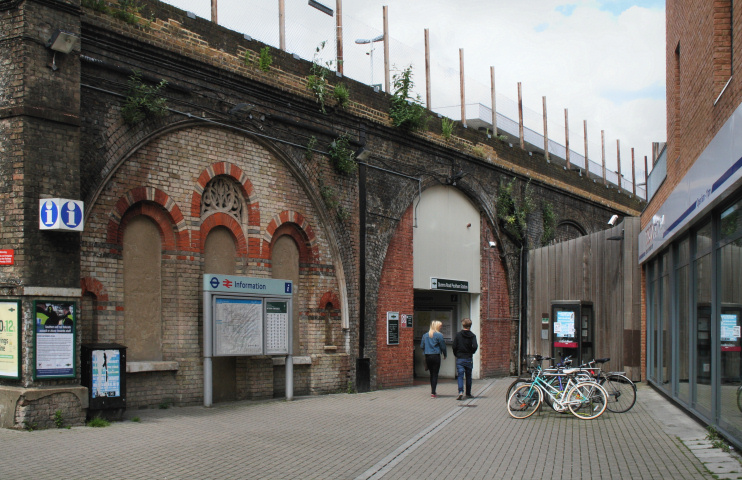 Most of the road falls within Peckham but the eastern end is in New Cross and it was formerly known as Deptford Lane or Peckham Lane. The surrounding neigh­bour­hood consisted of market gardens until about 1840 when a network of terraces called New Peckham began to be laid out.

Its station (orig­i­nally Peckham) opened on a new section of line between East Brixton and London Bridge in 1866. In the same year the road was renamed in honour of Queen Victoria and the station soon followed suit.

From 1893 the street’s principal business was Evans Cook, which began as a second-hand furniture store and subse­quently diver­si­fied into removals.

Doctors George Scott Williamson and Innes Pearse of the Royal Free Hospital opened the Pioneer health centre at 142 Queens Road in 1926. The doctors chose the area because it contained a cross section of society. They provided regular medical checks and gave advice on healthy living, and found much more sickness than they had expected. In 1935 the centre moved around the corner to St Mary’s Road, into purpose-built premises that still look modern today.

Another signif­i­cant doctor who practised in Queens Road in the 1930s was Dr Harold Moody. A Jamaican immigrant who studied medicine at King’s College, Moody was the founder of the League of Coloured Peoples and the father of several talented and high-achieving black Britons. A blue plaque marks his former surgery at 164 Queens Road.

Modern housing devel­op­ments in the Queens Road area include Peckham’s Acorn estate and the Somerville estate in New Cross. Quay House, on Kings Grove (formerly Kings Road), is a 2001 conver­sion of a 1930s dairy depot into an architect’s office, sculpture studio and home with a new-build devel­op­ment of three flats above.