The Chapter House is an octagonal building at West­min­ster Abbey, noted for its magnif­i­cent windows, sculp­tures and vaulted ceiling (shown below). It served as a meeting place for the abbey’s monks and other digni­taries, and also regularly for Parlia­ment between 1377 and 1547. The present structure was completed in 1253; its prede­cessor, which was probably round, was built in the 1050s.

An oak door in the vestibule of the Chapter House has been iden­ti­fied as the oldest in Britain. The door was reused from the original building and was said to have been covered in the skin of a sacri­le­gious felon who was flogged to death in the Middle Ages. However, fragments of hide found on the door have been tested and iden­ti­fied as having belonged to a cow.

A portrait of Elizabeth II by Ralph Heimans went back on display in the Chapter House in mid-July 2013 – with a enlarged security barrier and a guard in place – a month after the painting had been defaced with purple paint by a Fathers4Justice campaigner. 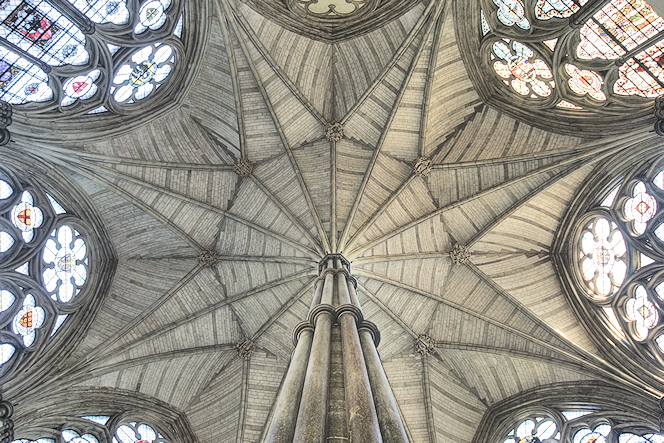