55 Broadway was built as the head­quar­ters of London Under­ground, designed by Charles Holden and built between 1927 and 1929. In September 2019 Transport for London sold the monu­mental art deco structure to property investor Integrity Inter­na­tional Group, probably for conver­sion to a hotel.

The building is graced by ten stone reliefs, none of which was much appre­ci­ated at the time of its construc­tion, including works by Eric Gill and Henry Moore, and a pair of pieces by Jacob Epstein (1880–1959), entitled Day and Night.

Public and press oppro­brium centred on Day for its portrayal of a father and his naked son and, in partic­ular, for the propor­tions of the boy’s phallus. Frank Pick, ‘the man who built London Transport’ and commis­sioned the work, stood by Epstein and threat­ened to resign rather than remove the sculpture but Epstein deflected the criticism by ascending the building one night and reducing the length of the offending appendage by 1½ inches (3.8 cm). 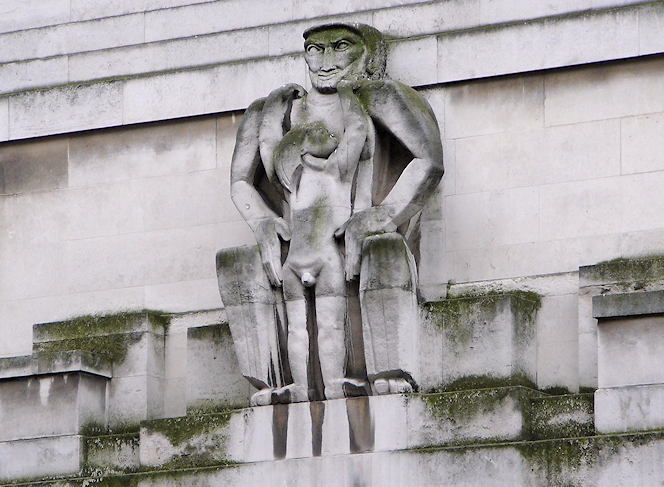