“There are two good inns at Carshalton: the Greyhound, kept by Mr. Hoystrop; and the King’s Arms, by Mr. Brown. The Greyhound is one of the pleas­an­test inns in the county.” So wrote John Hassell in Picturesque Rides and Walks, with Excur­sions by Water, Thirty Miles round the Metrop­olis (Volume I, 1817).

Not everyone was so admiring. In his Narrative of the History of Greater London (1882), Edward Walford quotes an anonymous local poet thus:

“There’s the Fox and Hounds, whither hunters resort
When they’ve done a day’s murder they call Christian sport.
There’s a drab-coloured Greyhound, the principal inn,
Where the swells take their wine and get rid of their tin.”

The Greyhound Hotel sits opposite Carshalton Ponds, a few doors down from the ancient All Saints church and the implau­sibly named Anne Boleyn’s Well. The inn was known as the Greyhound as early as 1700 though most of the present group of struc­tures dates from the pub’s enlarge­ment around 1840, when it was a widely adver­tised centre for Surrey field sports. The pub sign nowadays depicts a racing greyhound – and has done for the best part of a century – but the hares orig­i­nally chased here­abouts were real ones.

The Greyhound is now a Young’s pub and hotel, with a restau­rant, two bars and 21 bedrooms. 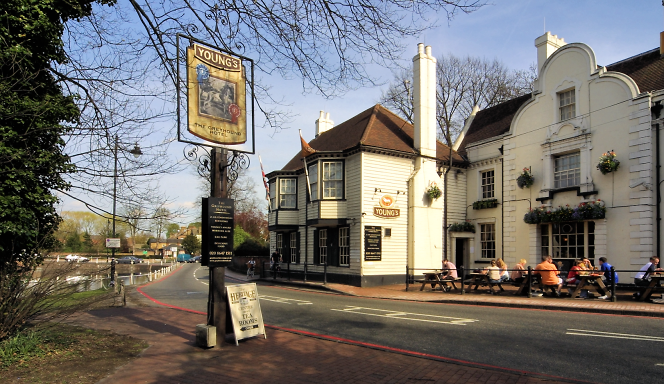