Lord’s is the head­quar­ters of the Maryle­bone cricket club (MCC), the Middlesex county cricket club and the England and Wales Cricket Board, in St John’s Wood. The ground was opened by Thomas Lord (1757–1832) who was groundsman at the White Conduit Club, Islington, in 1780.

In 1797 he started a cricket ground of his own on the site of what is now Dorset Square, Maryle­bone, where he founded the MCC. In 1811 he moved the turf to a new site near the Regent’s Canal, and in 1814 he trans­ferred to the present ground, the site of a former duck pond. The success of the venture prompted him to build a pavilion and a tavern.

Lord retired in 1825, leaving behind a club that had become the country’s leading cricket team and the game’s recog­nised governing body. From 1838 lawn tennis was also played at Lord’s and a sub-committee of the Maryle­bone club later formu­lated that game’s first laws.

In 1878 the MCC invited Middlesex County Cricket Club to make Lord’s its home. The ground was extended with the acqui­si­tion of Henderson’s nursery – hence the ‘nursery end’. An under­ground station was built at Lord’s in 1868 (orig­i­nally named St John’s Wood Road), but closed with the opening of the present St John’s Wood station in 1939.

The Mound Stand was remod­elled and extended in 1987, adding a public concourse to the underside and a new steel super­struc­ture on top, with private boxes and dining rooms hanging below a ‘tented roof’.

The ground’s award winning media centre was built in 1999, and was at first sponsored by NatWest (as shown in photo below). JP Morgan is the centre’s present sponsor.

As well as the home games of the Maryle­bone and Middlesex clubs, the venue also hosts inter­na­tional matches and the Eton v. Harrow and Oxford v. Cambridge fixtures. At the 2012 Olympic Games the archery compe­ti­tion was held at Lord’s. 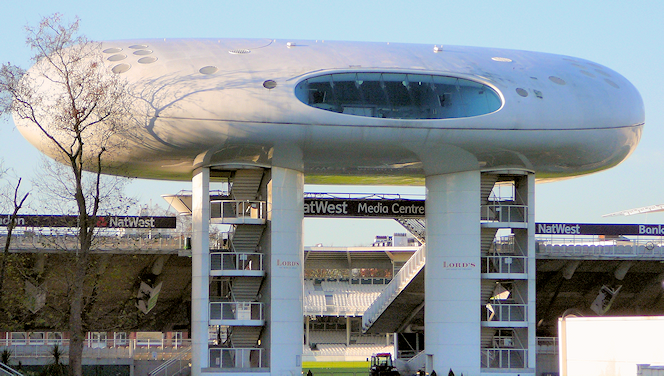