Marl­bor­ough House is a mansion in Pall Mall, built in 1709-11 for the Duke and Duchess of Marl­bor­ough, on part of the site of the St James’s Palace pheas­antry. The duchess commis­sioned Sir Christo­pher Wren to design the house, though the plans were drawn up by his son, Christo­pher Wren the younger. She super­vised the house’s comple­tion herself after falling out with Wren and sacking him (the duchess made a habit of falling out with people).

The house is built of red Dutch bricks that were carried as ballast on the return journeys of vessels that had trans­ported soldiers to Holland to fight under the Duke of Marl­bor­ough. Inside the house, paintings of the duke’s battles line the walls of the central salon and the staircases.

The dukes of Marl­bor­ough occupied the house until 1817, whereupon it reverted to the Crown. Its residents there­after included several royal widows and Edward, Prince of Wales (later Edward VII). Sir James Pennethorne, chief architect of the Office of Works, oversaw extensive alter­ations to the house in 1863 to suit the prince’s require­ments. During Edward’s occupancy it became the centre of fash­ion­able society and his inner circle became known as the Marl­bor­ough House Set.

In 1959 Marl­bor­ough House was given to the govern­ment and it is nowadays home to the Common­wealth Secre­tariat and the Common­wealth Foun­da­tion. A number of inde­pen­dence nego­ti­a­tions have been held here.

The house is not usually acces­sible to the public but in recent years parts have been opened up for viewing on the Saturday of London Open House weekend. 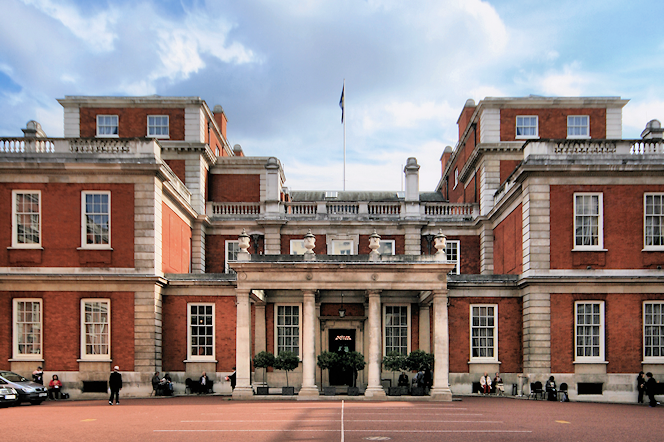