‘Mind the gap’ is the most famous recorded announce­ment on the London Under­ground network. The necessity for the warning arises when inevitably straight-carriaged trains arrive at stations with curving platforms, upon which the cautionary advice is often sten­cilled or mosaic tiled. The brevity of the phrase has been said to derive from the limi­ta­tions of solid-state digital recording tech­nology when it was first intro­duced in the late 1960s – though Hidden London is uncertain whether this is correct. T‑shirts and various gift items bearing the message have become popular tourist souvenirs.

“A voice came over the loud­speaker, that formal, disem­bodied male voice that warned ‘Mind the Gap’. It was intended to keep unwary passen­gers from stepping into the space between the train and the platform. Richard, like most Londoners, barely heard it anymore – it was like aural wallpaper.”

The words ‘Caution: Gap’ have recently appeared on some tube station platforms instead of ‘Mind the gap’. Hidden London doesn’t know why this is. Perhaps it’s a response to the ‘aural [and visual] wallpaper’ phenom­enon. If passen­gers had stopped noticing the ‘Mind the gap’ signs Transport for London may have felt the need to warn them in a fresh way. 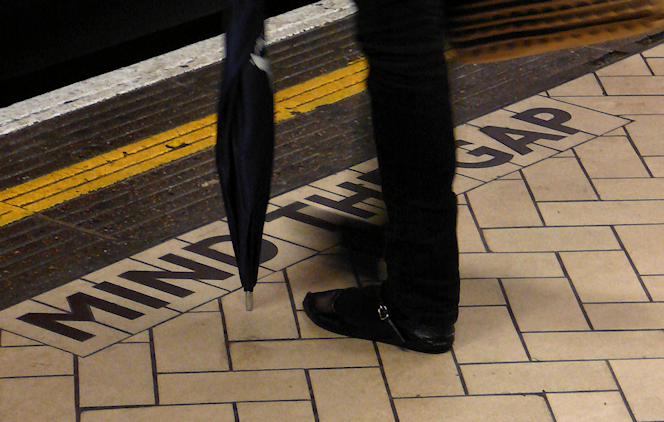