The Oxo Tower is a South Bank landmark surmounting a former cold store and meat products factory. It was built in the late 1920s, retaining some of the river­front facade of a Post Office power station that had formerly occupied the site, then known as Stamford Wharf.

To circum­vent a prohi­bi­tion on Thames-side adver­tising, owners the Liebig Company had the tower’s windows framed and glazed in a way that spelt out the name of its leading brand of meat extract.

After a period of dere­lic­tion in the 1970s, the building was rescued from the threat of demo­li­tion following an exemplary campaign by a local action group. Coin Street Community Builders restored the main building in the mid-1990s and rede­vel­oped the neigh­bouring area. 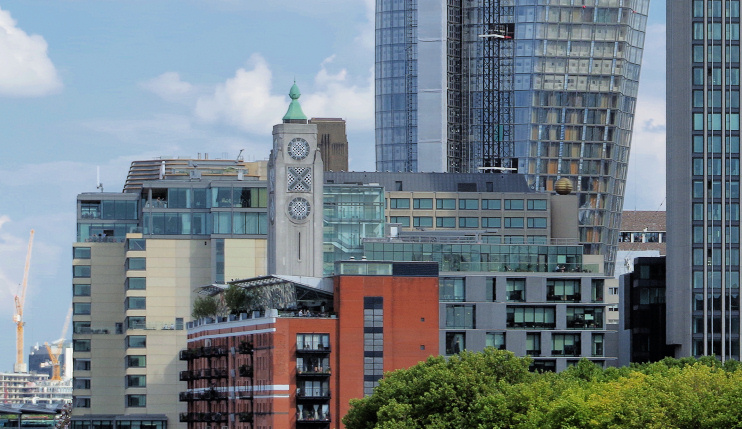 * The picture of Oxo Tower and taller neighbours above is brightened and radically cropped from an original photograph, copyright Matt Buck, at Flickr, made available under the Attribution-ShareAlike 2.0 Generic Licence. Any subsequent reuse is freely permitted under the terms of that licence.