Potters Fields is a public park located imme­di­ately south-east of what was City Hall and north of Tooley Street. The park was pleas­ingly land­scaped and furnished in 2007 – but was subse­quently permitted to detero­r­iate. It is one of the few green spaces close to the riverside.

The name ‘potter’s field’ was tradi­tion­ally applied to a burial ground reserved for strangers and the friend­less poor, in an allusion to the field bought by the chief priests with the 30 pieces of silver returned to them by the repentant Judas Iscariot. However, in this case, the park’s identity seems to derive from the presence of potteries operated here­abouts by Dutch immi­grants in the late 16th and early 17th centuries.

In September/October 2003 an estimated 250,000 people visited Potters Fields over a 44-day period to watch (and in some cases abuse) the American illu­sionist and endurance artist David Blaine as he dangled in the air inside a trans­parent case.

In October 2017 the Bridge Theatre opened at 3 Potters Fields Park. It is the home of the London Theatre Company. 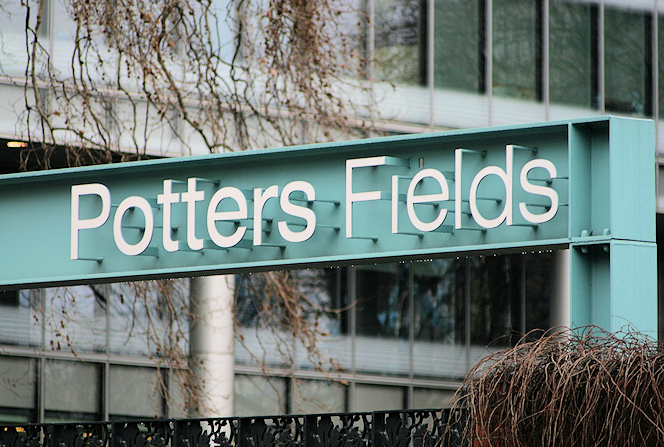