The ravens of the Tower

According to a legend of obscure prove­nance, the Tower of London – and the entire kingdom – will fall if its resident corvids ever leave. One version has it that the head of the medieval Celtic warrior Brân (a name that means ‘crow’ or ‘raven’) lies buried beneath the White Tower and that the ravens embody his spirit.

Charles II (r.1660–85) is said to have been the first monarch to decree that six ravens of the Tower should be protected, despite the complaints of his astronomer, John Flamsteed, that they impeded the business of his obser­va­tory in the White Tower.

However, histo­rians have struggled to find proof that ravens were routinely conserved at the Tower before the latter part of 19th century and prophe­cies of calami­tous conse­quences in the event of their departure may be of even more recent origin.

A history of the Tower written in 1866 by its lieu­tenant governor, Lord de Ros, has nothing to say about ravens. In Birds in London (1898), WH Hudson merely states that “for many years past two or three ravens have usually been kept at the Tower of London,” and adds that a raven named Jenny was the sole tenant from 1890 until the author­i­ties got around to finding her a mate in 1897.

Never­the­less, much play is nowadays made of the ravens’ presence. At least seven are almost always in residence, occupying lodgings next to the Wakefield Tower and presiding over four different terri­to­ries within the Tower precincts during daytime.

Each bird has the lifting feathers of one wing clipped, thus unbal­ancing its flight and deterring it from straying far. Beefeaters are at pains to insist that the procedure does not harm the ravens in any way. 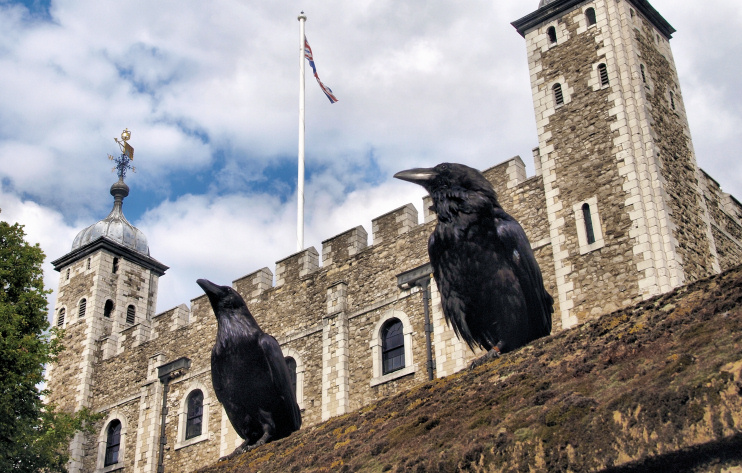 The photo of ‘Two ravens and the Tower of London’ is adapted from an original photograph by ‘Norppa’ at Wikimedia Commons, made available under the Attribution-ShareAlike 3.0 Unported licence.