The St Martin’s Theatre is a 550-seat playhouse located just off Cambridge Circus, on West Street.

Richard Greville Verney, 19th Baron Willoughby de Broke, commis­sioned WGR Sprague to design the theatre and, after delays caused by the outbreak of the First World War, it opened in late 1916. The prosce­nium arch is embla­zoned with the coat of arms of the Willoughby de Brokes, who still own the building and have kept it looking very much as it did when it first opened. The theatre is managed by Stephen Waley-Cohen, who also owns the rights to its present (and future) produc­tion, The Mousetrap.

By far the longest-running stage show in London, and indeed the world, The Mousetrap is a country house murder mystery adaptated from Agatha Christie’s 1947 radio play Three Blind Mice. After a short pre-West End tour, The Mousetrap opened in November 1952 at the Ambas­sadors Theatre and in 1974 moved next door to the St Martin’s, where it seems likely to remain forever if tourists continue to visit London.

“Going to see The Mousetrap, as she [Elizabeth II] was reminded by her 2002 visit, is very much like taking a trip in a time machine. The St Martin’s Theatre is a very attrac­tive panelled audi­to­rium that looks more like an English country house than a West End theatre, and the play’s setting, construc­tion, plot and char­ac­ters are all very 1950s.”

At the end of every perfor­mance of The Mousetrap the audience is asked not to reveal the dénoue­ment to the unini­ti­ated but it has become something of a naughty London tradition to spill the beans whenever the oppor­tu­nity arises. (Click here if you want to know how the play ends.)

The St Martin’s Theatre page of the SeatPlan website has views of the stage (and Mousetrap set) from every seat in the house. 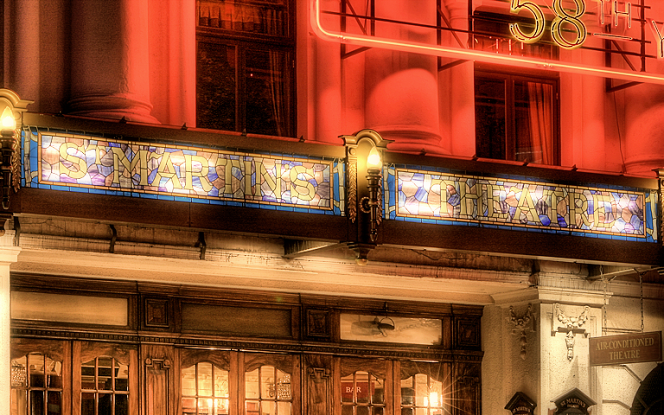