Staple Inn is the most intact survivor of the Inns of Chancery, situated imme­di­ately south of Chancery Lane under­ground station. First recorded in the 13th century as ‘le Stapled Halle’, the name probably signified a covered hall built with pillars (from Old English stapel, ‘column’ or ‘tree trunk’). Orig­i­nally a wool market, it became c.1415 the home of the Society of Staple Inn, an asso­ci­a­tion of lawyers and legal students. In 1580 the society built a new and magnif­i­cent hall, followed in 1586 by buildings facing High Holborn. The latter remain almost unaltered but the hall was hit by a flying bomb in 1944. It was after­wards rebuilt to the original plan, retaining materials that had been salvaged from the wreckage or, like the stained-glass windows, had been earlier placed in storage. Since 1887 Staple Inn has been the head­quar­ters of the Institute of Actuaries. 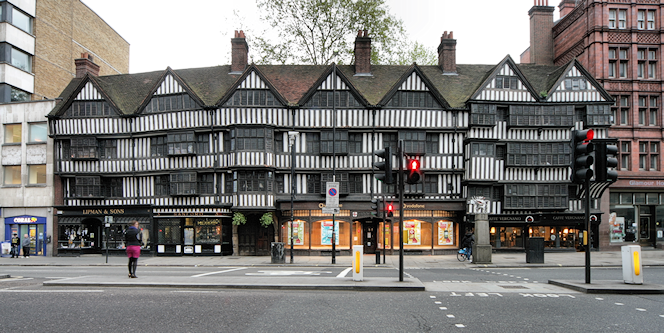