The Unicorn is a theatre for young people, based in Tooley Street since 2008. It evolved from a mobile theatre founded in 1947 by Caryl Jenner (1917–73), which operated at first in the northern Home Counties and then nation­wide. As the English Children’s Theatre, the company produced its first season at the Arts Theatre, Great Newport Street, in 1961 and the following year changed its name to the Unicorn Theatre Club for Children.

The company remained at the Arts Theatre until 1999, after which it performed at various theatres while a purpose-built home was designed and constructed, with two theatres, four floors of public spaces and two rehearsal studios. Subsidised by the Arts Council, the Unicorn stages its own produc­tions and those by other British and inter­na­tional theatre companies, as well as hosting workshops and related theatrical activities.

Hidden London wanted to take a more evocative photo than the one below and was hoping to encounter a mythical beast in the foyer. However, a helpful assistant explained (in a whisper, while glancing over her shoulder) that the new lead­er­ship team doesn’t like unicorns and has consigned all trace of the creatures to a storage room. “Is there not even a horn poking out somewhere?” I pleaded. “Not a sausage,” she replied, glumly. 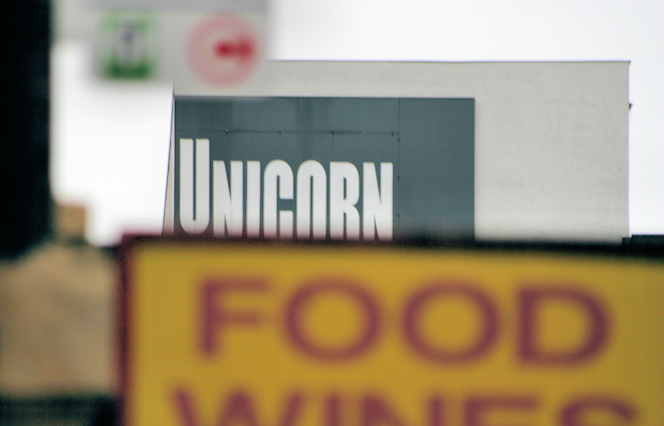