The Ace Café is almost synony­mous with the words ‘bygone era’. Like the North Circular Road beside which it stands, it opened between the wars – a fore­runner of today’s motorway service stations, providing rest and refresh­ment to motorists enjoying their first expe­ri­ence of the freedom of the open highway. The Ace was wrecked by a bomb in 1940 and rebuilt after the war ended.

In the mid-1950s a new breed of road user began frighten the life out of sedate car drivers. Young motor­cy­clists burned up the dual carriageway and gathered here to listen to the first flow­er­ings of rock ’n’ roll. The café reached the height of its fame in the early 1960s, and when British or American stars like Billy Fury or Gene Vincent were in London their managers put a photocall at the Ace high on their itinerary.

As the ‘rocker’ gener­a­tion began to fade away so did the Ace. It closed in 1969 and the building served various other purposes until 2001, when its classic art-deco influ­enced exterior was restored and the interior was redec­o­rated in homage to its glory days. Since then the Ace has steadily rebuilt its repu­ta­tion as a palace of the motor­cycle. Rallies of all kinds are held here and, when bikers organize a ride in the London area, or plan to descend on West­min­ster to protest against some proposed new tax or restric­tion, they rendezvous first at the Ace. Fans of scooters, classic cars and old-school rock ’n’ roll also meet at the Ace for special events and live shows.

On the average day, however, you’re more likely to find the café’s tables occupied by solitary truckers or little groups of sales reps. The food is better than average and there’s a licensed bar. A little souvenir shop offers all kinds of gifts and mementos branded with the café’s ace of clubs device and chequered flag border. At the time of writing they’re even selling packs of Ace-branded sausages to take home. There are free exhi­bi­tions too, of art and artefacts cele­brating post-war youth culture and motor­cy­cling heritage. 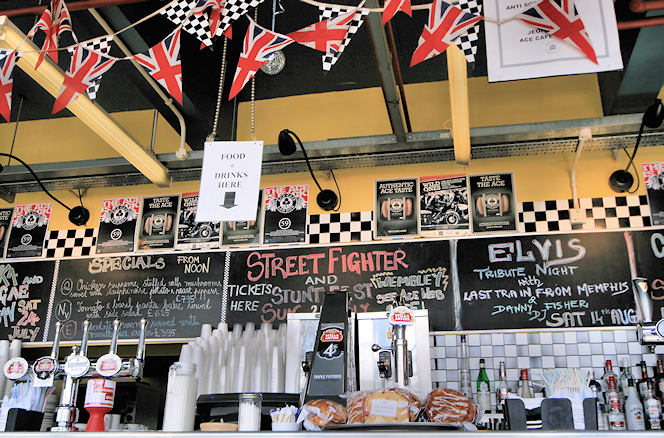