A late Victorian urban village in the far north of the borough, tucked between the railway line and the western end of the Harrow Road 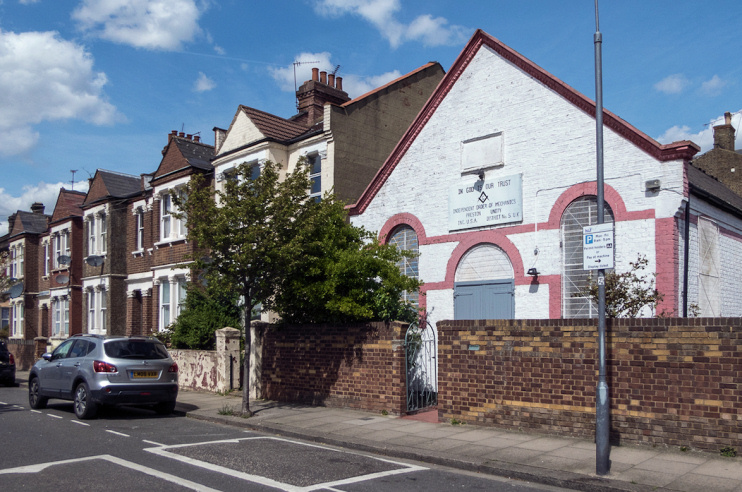 There was never a college in College Park: the name derives from Oxford’s All Souls College, which used to own the land. (The college still owns land in Harlesden, Willesden and Kensal Rise, but not in College Park, it seems. See the map on this page at Who Owns England.)

The area’s devel­op­ment during the last quarter of the 19th century was stim­u­lated by activity on both sides. To the east, Kensal Green had been built up following the success of its cemetery. To the west, Willesden Junction station had opened in 1866.

At the corner of Kenmont Gardens and Valliere Road, Kenmont Gardens school (now Kenmont primary school) was built for the London School Board in 1883. Nikolaus Pevsner describes the structure as “a roman­ti­cally asym­met­rical three-storey compo­si­tion with battle­ments and turret.” Nowadays the school has three main community languages: English, Portuguese and Somali.

The Mayhew animal home at the corner of Ponsard Road and Trenmar Gardens occupies the former site of the Christ Church mission to College Park.

College Park has a high popu­la­tion turnover and a wide variety of ethnic minori­ties. It also has char­ac­ter­is­tics that have made it ripe for gentri­fi­ca­tion, so it now presents contrasting aspects: many prop­er­ties have been done up while a dwindling propor­tion remain run-down; there are smart new live/work units on Waldo Road and tatty shops along Harrow Road.

Located at the corner of Scrubs Lane and Harrow Road, the College Park hotel was a local landmark. It closed in the early 1990s and has since been converted into flats.

* The picture of Ponsard Road at the top of this page is adapted from an original photograph, copyright Christine Matthews, at Geograph Britain and Ireland, made available under the Attribution-ShareAlike 2.0 Generic Licence. Any subsequent reuse is freely permitted under the terms of that licence.