A messy area situated north-west of Rush Green, with railside utilities and works, some skimpy greenery, and housing that looks uncomfortable about being here 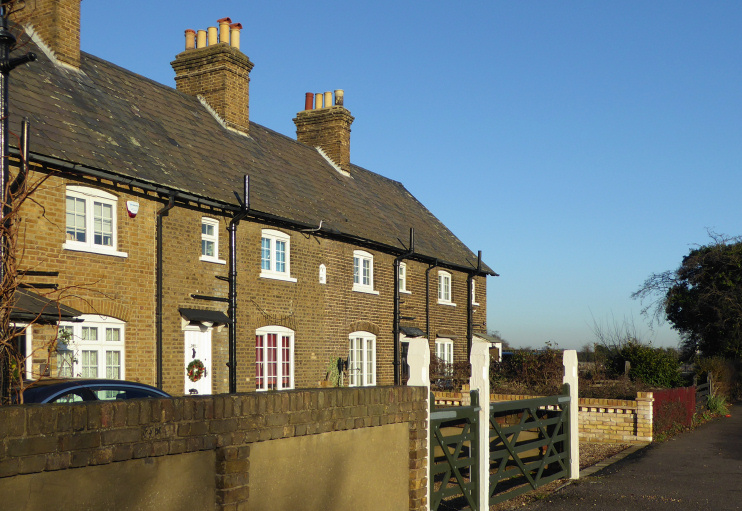 Crowlands takes its name from a former landowner, John Crowland, whose family was living here in 1480. The land was known as Crowland by 1514 and as Crowlands by the 19th century. A map of 1805 shows ‘Lowlands’ north of London Road in the area of Crown Farm (formerly Pigtail Farm) but this was presum­ably a cartographer’s error.

Crown Farm, which is of late-16th-century origin, is grade II listed – as is its late-18th-century granary. The farm is located near the top left of the satellite map below (top centre on narrow screens).

The hamlet was orig­i­nally focused on the junction of Crow Lane and Jutsums Lane, now the site of commer­cial premises and a recre­ation ground. The Eastern Counties Railway cut across the heathland in 1839. Work was once begun on a station at Crowlands, but it was never completed.

Shown in the photo above, Crown Cottages were built on London Road in 1869. When London Road school was built for 280 infants in 1908 its surround­ings were still predom­i­nantly rural.

Crow Lane at that time was a narrow winding road, bordered by ditches and large areas of gravel. The lane was loosely built up with compact houses in the late 1920s and early 1930s, when St Agnes mission church was built and the school was enlarged, but its seniors trans­ferred to the Warren School in Dagenham in 1937. London Road school became Crowlands school in 1956 and a purpose-built nursery unit was added in 2001.

There are pockets of social and economic disad­van­tage among the neighbourhood’s mainly white, working-class population.

To the south, Crowlands golf centre has a links-style nine-hole course with naturally formed ponds and wetlands, and an ‘aqua driving range’ where golfers hit their balls into a lake.

* The picture of Crown Cottages at the top of this page is adapted from an original photograph, copyright Marathon, at Geograph Britain and Ireland, made available under the Attribution-ShareAlike 2.0 Generic Licence. Any subsequent reuse is freely permitted under the terms of that licence.