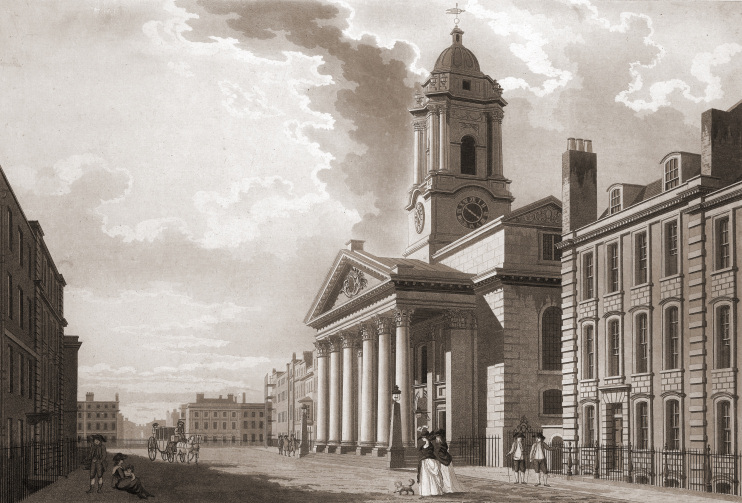 Named in honour of George I, the Elector of Hanover, the square was laid out in the late 1710s. Soon after­wards, St George’s church was built to its south – on St George Street – as one of London’s planned ‘fifty new churches’ (only around a dozen of which actually came to pass).

The effect of the church’s imposing portico is impaired by the narrow­ness of the street – a grand approach or a site on the square itself would have done it better justice. Never­the­less, St George’s became the capital’s most fash­ion­able venue for society weddings.

O could I as Harlequin frisk,
And thou be my Columbine fair,
My wand should with one magic whisk
Transport us to Hanover Square:
St George’s should lend us its aid.

The church is nowadays best known for hosting the main perfor­mances of the annual London Handel Festival, which honours the great composer’s 35 years as a parish­ioner and worshipper here.

Hanover Square itself is graced by several statues and sculp­tures – both old and new, in and around the garden – and also by a cabmen’s shelter on the north side. The perimeter of the square was orig­i­nally lined with fine terraced houses, occupied by some of London’s most cele­brated society figures. Most of these struc­tures have since been replaced by fairly tasteful and compact office blocks, though some from the mid-20th century cannot be so gener­ously described.