An unspoilt nine-acre island in the Thames, located off Old Isleworth at the mouth of the River Crane 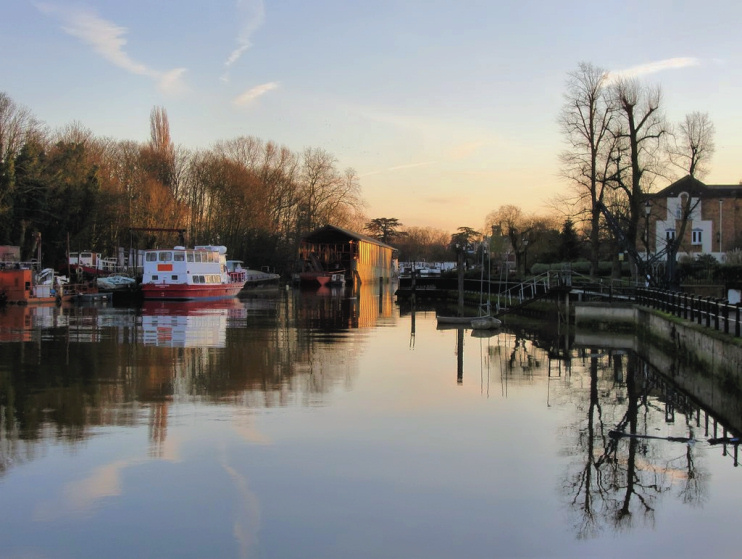 Rows of ancient stakes have been found at the southern end of Isleworth Ait. These were at first inter­preted as some kind of forti­fi­ca­tion but they were more probably the remnants of tidal fish traps, which have also been exposed on the nearby mainland foreshore.

A Roman legion is said to have waded westward across the Thames via the ait in 54bc – and then headed north to carry on conquering. However, the Romans are said to have done a lot of idio­syn­cratic things in the London area at this time, often (as in this case) with very limited supporting evidence.

In the 17th century there were four aits here but their dividing channels have since silted up. Osiers were culti­vated for their flexible twigs, as they were on several Thames aits.

This was formerly part of the Syon Park estate of the dukes of Northum­ber­land, who permitted a rudi­men­tary swimming pool to be built here for the use of local children in the mid-19th century, but nothing of this remains.

Isleworth Ait is now a nature reserve managed by the London Wildlife Trust’s Hounslow group on behalf of owners Thames Water. Beneath the high canopy of mature sycamores, poplars and willows there are hawthorns, hollies and elders, summer snowflakes and marsh marigolds. The island’s fauna range from tree-creepers, king­fishers and herons to bats, butter­flies and some rare snails (specif­i­cally the Thames door snail and German hairy snail). In order to preserve the habitat, public access is discour­aged – but the trust occa­sion­ally organises super­vised visits.

Human activity is permitted at the water’s edge – despite the objec­tions of some residents opposite – in the form of a floating boatyard and dry dock. The dimly sunlit yard is visible in the centre of the photo­graph above.*

* The picture of the Thames at Isleworth Ait on this page is adapted from an original photograph, copyright Stefan Czapski, at Geograph Britain and Ireland, made available under the Attribution-ShareAlike 2.0 Generic Licence. Any subsequent reuse is hereby freely permitted under the terms of that licence.