A former village, now lost in north Sidcup, with a recent history dominated by facilities for young people 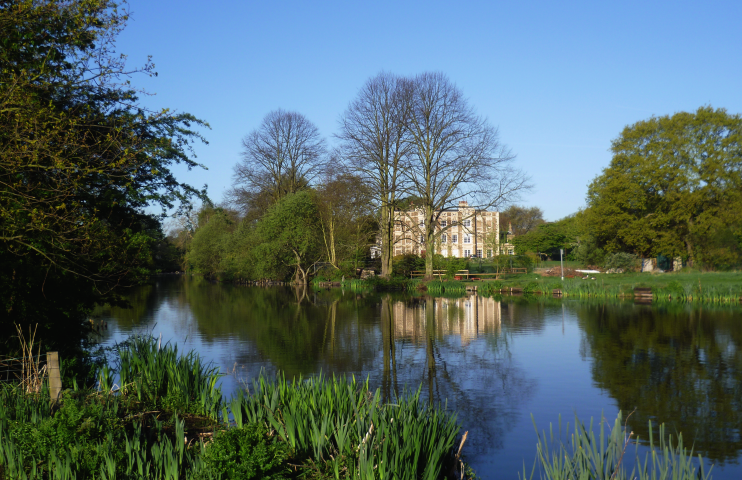 Lamorbey was orig­i­nally spelt Lamienby, which briefly became corrupted to Lamb Abbey (hence Abbeyhill Park) before settling down to its current form. The name derives from a local family, also known as the Sparrows, which lived here from the late Middle Ages.

On the death of Thomas Sparrow in 1513 the estate passed to James Goldwell, who built himself a house called Lamienby Goldwell. The house was rebuilt in 1744 and its grounds were laid out as a park, shown in the photo­graph above,* part of which is nowadays open to the public. To its west lay the 16th-century Marrow­bone Hall, which was demol­ished sometime before 1850.

Lamorbey’s popu­la­tion almost doubled in 1902 when the Greenwich and Deptford children’s homes opened on the site of Marrow­bone Hall with accom­mo­da­tion for 587 children and over 60 staff. A school was built for the children, on Burnt Oak Lane.

After the First World War the surrounding orchards, market gardens and nurseries began to disappear beneath streets of suburban housing and Lamorbey absorbed the neigh­bouring hamlet of Halfway Street. Some plots of land were sold to disabled ex-servicemen for £80 each.

A new home for the Sidcup county school for girls (now Chisle­hurst and Sidcup grammar school) was built on the south side of Lamorbey Park in 1931.

In 1950 Rose Bruford estab­lished her drama school at Lamorbey House, where she served as principal until 1967.

The Hollies children’s home closed in 1983 and the site was laid out with housing in the early 1990s. Some of the home’s ancillary struc­tures survive, notably Thomas Dinwiddy’s clock-faced water tower.

* The lovely picture of Lamorbey Park on this page is slightly modified from an original photograph, copyright Marathon, at Geograph Britain and Ireland, made available under the Attribution-ShareAlike 2.0 Generic Licence. Any subsequent reuse of the image is freely permitted under the terms of that licence.