A primarily 1930s suburb situated between Chislehurst and Bexley 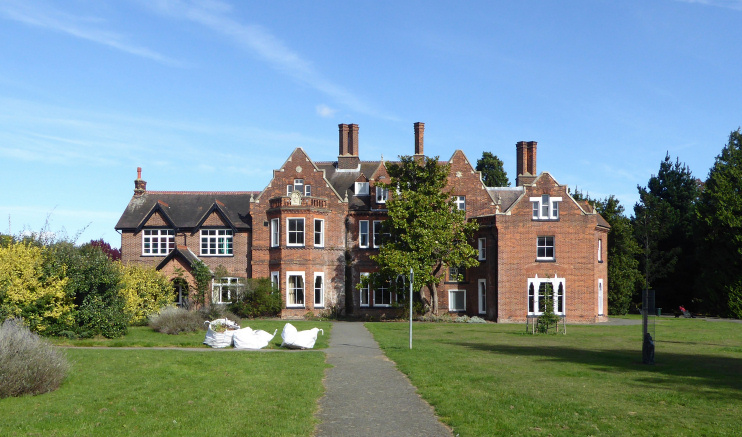 Sidcup’s name was first recorded in 1254 (as Cetecopp) and is derived from Old English words meaning either a ‘fold in a hill’ or ‘seat-shaped or flat-topped hill’. This was essen­tially a field name and there is no record of a hamlet existing here until 1675. One nearby house called Frognal, which had pre-dated the hamlet, was rebuilt on several occasions between the 15th and the early 18th centuries.

The village gained an inn, a forge and a scattered handful of country seats. Shown in the photo above,* Sidcup Place, as it is now called, is said to have been built in 1743 by an officer in the army engineers as a star-shaped fort. If this is true the house was soon remod­elled on more conven­tional lines and has since been much extended. The house is now a Marston’s pub and restau­rant called the Star at Sidcup Place, which stands in Sidcup Place Park.

Sidcup Manor House (orig­i­nally Place Green House) was built around 1790. The church of St John the Evan­ge­list was dedicated in 1844 and soon after­wards the village acquired its first terraced housing, in Church Place.

Sidcup station opened in 1866 on the Dartford loop line and second-class (rather than third-class) season ticket-holders almost imme­di­ately began to settle here. It was the siting and naming of the station that deter­mined Sidcup’s subse­quent pre-eminence over neigh­bouring villages like Foots Cray and the now-absorbed Halfway Street, which until then had been of equal or greater significance.

In the 40 years after 1871, Sidcup’s popu­la­tion rose from 390 to 8,493. The new residents were housed in small estates built by indi­vidual devel­opers and the prop­er­ties were substan­tial detached or semi-detached villas, with gardens as large as a quarter of an acre. In response to the suburb’s growth, St John’s church was rebuilt in its present form at the beginning of the 20th century.

Almost all the early building took place in the hinter­land of Station Road; north of the tracks the hamlet of Lamorbey remained largely undis­turbed until the estab­lish­ment of the Greenwich and Deptford Children’s Homes in 1902.

In 1917 the grounds of Frognal became the site of a hospital that specialised in the treatment of soldiers and sailors with facial and jaw injuries. It has since evolved into Queen Mary’s hospital.

After the First World War, and espe­cially in the ten years from 1929, a building boom carried Sidcup northward beyond the railway line and south to the new by-pass (A20) to fill roughly its present sprawling extent, while a denser network of streets encircled the old village.

Apart from the construc­tion of council estates soon after the Second World War, the main changes in the second half of the 20th century were the wide­spread extension of private homes, with features such as garages and granny flats, and the building of offices in central Sidcup.

More recently, privately built apartment blocks such as The Fold, shown in the small photo­graph,* have been squeezed in wherever planning permis­sion can be obtained.

Sidcup Manor House was used by the council’s registry service before it moved to Danson House in July 2016. The manor house’s future is presently uncertain; at the time of writing the council is hoping to offload the building to a private developer who will convert it into a ‘boutique hotel and spa’.

The Sidcup ward has very low unem­ploy­ment, high home ownership and a rela­tively high number of pensioners living alone. Like much of this corner of Greater London, its ethnic profile is over­whelm­ingly white British.

In Harold Pinter’s influential 1960 play The Caretaker, the tramp Davies (played originally and in the film version by Donald Pleasence) insists repeatedly but implausibly that everything will be all right if he can only get down to Sidcup.

* The picture of Sidcup Place at the top of this page is adapted from an original photograph, copyright Ethan Doyle White, at Wikipedia, made available under the Creative Commons Attribution-ShareAlike 4.0 License. The picture of Sidcup Station and The Fold is adapted from an original photograph, copyright David Martin, at Geograph Britain and Ireland, made available under the Attribution-ShareAlike 2.0 Generic Licence. Any subsequent reuse of either image is freely permitted under the terms of those licences.