The district of Bexley lies on the eastern side of the borough of the same name, beside the River Cray 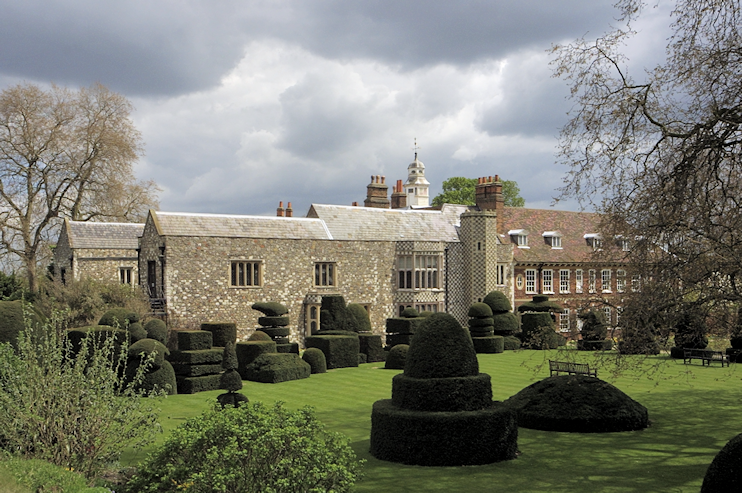 Bexley grew up around its mills beside the River Cray, which is bridged by the High Street. Its Old English name, Byxlea, is theorised to have denoted a settle­ment in a box wood clearing – but some experts disagree, arguing that box trees would have been unlikely to flourish on this terrain.

In 814 Kenulph, King of the Mercians, granted lands here to the Arch­bishop of Canter­bury. St Mary’s Church is of 13th-century origin and records of 1241 show a manor house on the site of Hall Place. Around 1540 Sir John Champneis (or Champneys), Lord Mayor of London in 1534, started the present Hall Place (shown in the photo above), probably using material salvaged from demol­ished monas­teries. His son Justinian extended the house in 1556, and Robert Austen more than doubled its size in the mid-17th century.

In 1623 William Camden granted the manor of Bexley to Oxford Univer­sity, which used the revenue to fund a profes­sor­ship of history. Styleman’s almshouses were built in 1755, at a time when the High Street was filling with merchants’ homes. In the 1770s a weath­er­boarded watermill was built on the riverside, together with Cray House, which was probably the home of the mill’s owner. The Bexley National Schools were estab­lished on Bourne Road in 1834.

After Bexley station opened in 1866 the town and outlying villages like Coldblow and Bridgen began to expand. Built on the grounds of Parkhurst House and Marl House, the Parkhurst estate offered large villas with long gardens for wealthier commuters. Semi-detached prop­er­ties followed in the decade from 1876. St John’s Church was built on Parkhill Road in 1882. Extensive subur­ban­i­sa­tion took place in the 1920s and 1930s, a process accel­er­ated by the elec­tri­fi­ca­tion of the railway. After the Second World War, green-belt legis­la­tion preserved the open land to the south and east. This, combined with the village centre’s desig­na­tion as a conser­va­tion area in 1972, has restricted oppor­tu­ni­ties for commer­cial or resi­den­tial growth, while enhancing the appeal of Old Bexley.

Hall Place has been home to a notorious rake, a music hall star and a school, and is now a civic amenity with delightful gardens. It is a popular venue for wedding celebrations.

The Conservative prime minister Edward Heath served as member of parliament for Bexley (ultimately Old Bexley and Sidcup) from 1950 to 2001.