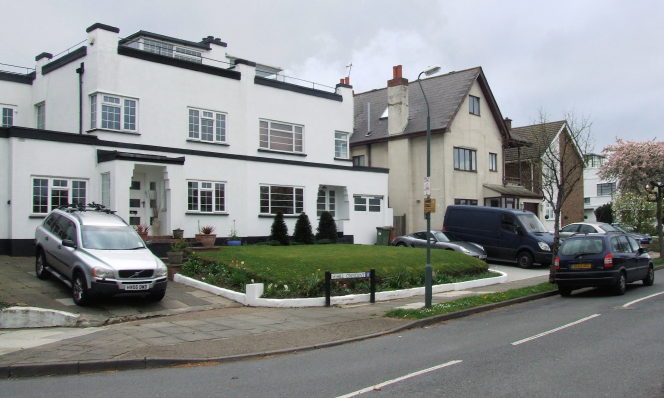 The furnace that gave its name to Tile Kiln Lane was owned by Lesnes Abbey prior to that insti­tu­tion’s disso­lu­tion in 1525. The produc­tion of clay roof tiles continued here until around 1700.

In the early 1880s Bexley’s growth as a pros­perous suburb prompted the construc­tion of a dozen or so substan­tial houses on Dartford Road and Wansunt Road.

Cold­blow’s name did not make its first appear­ance on a map until 1905 and doubtless referred to the local­i­ty’s exposed situation on the western edge of Dartford Heath.

This enclave was much rebuilt and extended in the years before and after the Second World War and only two of the original prop­er­ties survive. Some of the 20th-century houses are well-appointed and Wansunt Road is now the second most expensive street in the borough. Shown in the photo­graph at the top of the page,* Hill Crescent has several modernist houses of the 1930s, of which the most distinc­tive are numbers seven and nine.

Coldblow is shielded from the A2 to the north by Church­field Wood, a detached portion of Joyden’s Wood. A small area of the wood is dominated by field maple, a char­ac­ter­istic indicator of ancient woodland. The wood is privately owned but a public footpath runs along its length.

There are deneholes south of Dartford Road. These medieval shafts, unique to north Kent and south Essex, were probably dug to extract good quality chalk to use as fertiliser, although some have argued that they were hiding places.

Just across the present borough border, the inventor and engineer Hiram Maxim worked on the construction of biplanes in Baldwyn’s Park in the late 1880s and the 1890s. In an 1894 test flight he lifted that century’s largest flying machine off the ground, albeit briefly. Maxim lived at Baldwyn’s, a mansion situated in what became the grounds of Bexley Hospital.

* The picture of Hill Crescent at the top of this page is adapted from an original photograph, copyright Chris Whippet, at Geograph Britain and Ireland, made available under the Attribution-ShareAlike 2.0 Generic Licence. Any subsequent reuse is freely permitted under the terms of that licence.