Also known as Bexley Village, this is the historic heart of Bexley, situated at the south-eastern corner of the modern suburb 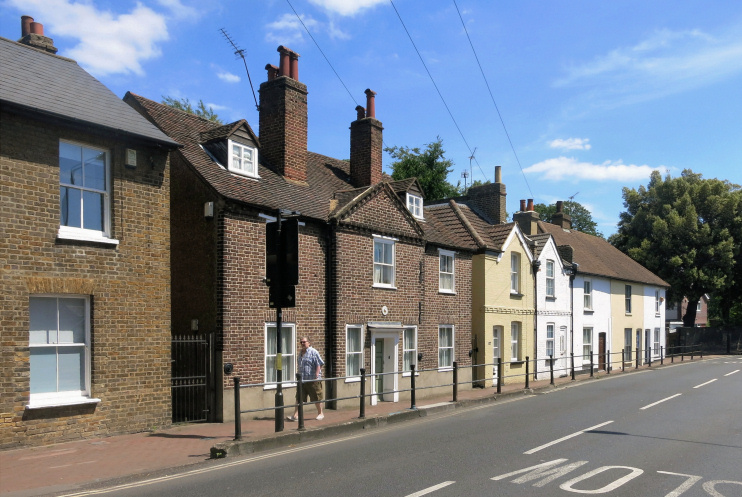 Old Bexley lies at the juncture of two ancient tracks beside a ford on the River Cray. One historic route ran east–west between Eltham and Dartford and the other followed the river north–south from Crayford to Orpington. These routes were well estab­lished in the Middle Ages, crossing the River Cray where today’s bridge now stands.

The grade II* listed parish church of St Mary the Virgin was built in the 13th century on the site of a Saxon prede­cessor, probably using some of its stones. The church is located near the eastern end of the High Street, on Manor Road.

The manor of Bexley belonged to the Arch­bishop of Canter­bury until 1536, when it was sold to Oxford Univer­sity. Part of the present manor house may date from soon after that. A north wing was added in the early 19th century. The well-concealed house stands north-east of St Mary’s church.

Bexley’s ‘Old’ prefix made its appear­ance in the second half of the 19th century and helped distin­guish the village from Bexley New Town, as Bexley­heath was called at that time.

St Mary’s church was heavily restored in 1882–3 by Basil Champneys and its present interior dates primarily from this makeover.

A number of 18th-century buildings on the south side of the High Street were lost during rede­vel­op­ment in 1966. The Old Mill burned down in the same year but it was rebuilt in replica form and later converted to resi­den­tial use.

Old Bexley cannot compete with Bexley­heath as a retail centre, so several shops and other commer­cial premises have been converted to cafés, bars and restau­rants. The late-Victorian Free­mantle Hall serves as a community centre and hosts events such as local art exhi­bi­tions, exercise classes, and craft and gift fairs.

* The picture of Bexley High Street at the top of this page is cropped from an original photograph, copyright Des Blenkinsopp, at Geograph Britain and Ireland, made available under the Attribution-ShareAlike 2.0 Generic Licence. Any subsequent reuse is freely permitted under the terms of that licence. The houses are on the north side of the High Street immediately east of the road bridge over the River Cray (1872). Numbers 101 to 105 are grade II listed and date from the mid-18th century.