A lacklustre pair of housing estates situated on high ground overlooking the valleys of the Cray and Shuttle rivers, midway between Sidcup and Bexley 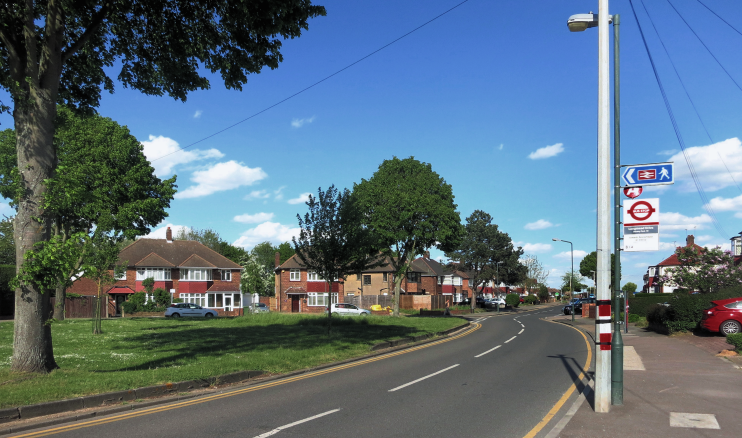 This was formerly the site of Tanyard and Hurst Farms, part of the estate of the Vansit­tart family of Foots Cray.

Sidcup cemetery opened on Foots Cray Lane in 1912, when its surround­ings consisted entirely of fields and scattered spinneys with rustic names like Poulter’s Spring, Grub Wood and Rutland Shaw. Only the last of these has survived, as a 5‑acre open space.

New Ideal Home­steads (NIH) laid out the first housing estate here in the mid-1930s – and made up the Albany Park name for it – publishing a sales brochure with the implau­sible pledge that “the charming coun­try­side shall perma­nently retain the rural character of its vistas and shall not suffer disfig­ure­ment in any way.”

NIH built at almost twice the housing density recom­mended by Bexley council and priced their prop­er­ties as low as £395, making them afford­able to working-class families wanting to escape inner London. Although the Dartford Loop railway line had been built in 1866, it was the devel­opers who opened a station here, in July 1935.

Despite its out-of-the-way location on a sharp bend on Steynton Avenue, the station was accom­pa­nied by a plethora of shops (many of which are now takeaways) and the mock-Tudor Albany Hotel. South of the tracks, a foot­bridge provides access to the station from Longmead Drive, shown in the photo­graph above.*

Hurst council infant school opened on Dorch­ester Avenue in 1935 and a junior school was added a year later. The schools were later combined as Hurst primary school, which nowadays has academy status.

The settle­ment was extended south-eastwards with the construc­tion of the Royal Park estate, which was begun just before the Second World War by NIH and completed after­wards by Bexley borough council. Kent county council opened Footscray Place county primary school on Riverside Road in 1951. The school was enlarged and renamed Royal Park in 1954.

Located at the corner of Hurst Road and the Penfold Lane footpath, Hurst (or Hurst Place) is a much-altered 18th-century mansion standing in 2.7 acres of grounds. It has been a community centre since 1954 and is presently managed by the Youth Action Diversity Trust.

Albany Park Baptists built a church hall on Stansted Crescent in 1955. They planned to erect a proper church too but this never even­tu­ated so the hall serves that purpose.

St Andrew’s church was built on a sloping site on Maylands Drive in 1964–5. Nikolaus Pevsner called its origami-style archi­tec­ture “ingenious, fash­ion­able and slightly absurd.” The granting of parochial status in 1969 was a special conces­sion as Albany Park fell well short of the 10,000 popu­la­tion normally required.

Trees were planted in 2001 on the site of disused allot­ments between the railway line and the prop­er­ties on the south side of Canter­bury Avenue. Named Millen­nium Woodland, the area forms an eastern extension of Abbey Hill Park.

Albany Park’s most signif­i­cant construc­tion project in recent years has been Belgravia Homes’ Cedarwood Place, an apartment block (plus a conve­nience store) that has replaced the former shops of Norman Parade, opposite St Andrew’s church.

* The pictures of Longmead Drive and St Andrew’s church on this page are both adapted from original photographs, copyright Des Blenkinsopp, at Geograph Britain and Ireland, made available under the Attribution-ShareAlike 2.0 Generic Licence. Any subsequent reuse is freely permitted under the terms of that licence.