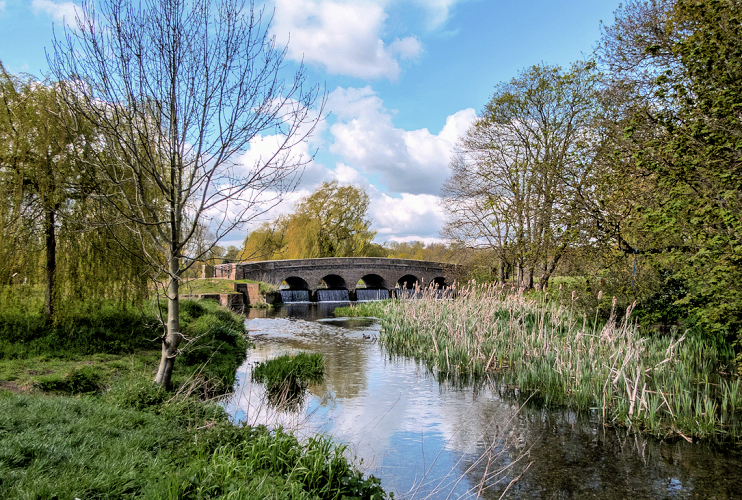 Archae­ol­o­gists have found evidence of the delib­erate burning of the woodland here during the mesolithic period to promote the growth of hazel, and of increased agri­cul­tural activity in Roman times.

Domesday Book recorded the landowner as Godwin Fot, who possessed a farm, four cottages and a mill – and gave his name to the manor. Conve­niently located where the Maidstone Road crossed the River Cray, the village (which was also spelt Footscray, and sometimes still is) grew steadily over the following centuries.

Around 1754 Bouchier Cleeve commis­sioned the building of Foots Cray Place, a Palladian mansion where he created a note­worthy collec­tion of art. In 1822 the house was acquired by chan­cellor of the exchequer Sir Nicholas Vansit­tart, later Lord Bexley. The Vansit­tart family retained a substan­tial land­holding in the area for the next century.

The arrival of the Sidcup by-pass brought busi­nesses here from the 1930s. Central Foots Cray is nowadays dominated by the indus­trial and commer­cial premises of the LEFA and Five Arches business parks and the Coca-Cola and Schweppes bottling plant, the source of the Dasani ‘pure water’ fiasco in 2004.

Rectory Lane has the grade II* listed All Saints church, which partly dates from about 1330, and a terrace of Georgian houses, but the majority of residents live in modern housing on or off Sidcup Hill and Cray Road.

Foots Cray Meadows lie to the north of the built-up area and contain the remains of Foots Cray Place, which burned down in 1949. King­fishers and ring-necked parakeets are among the park’s plentiful wildlife.