Half farming village, half council estate, flanking the A223 between Bexley and Foots Cray 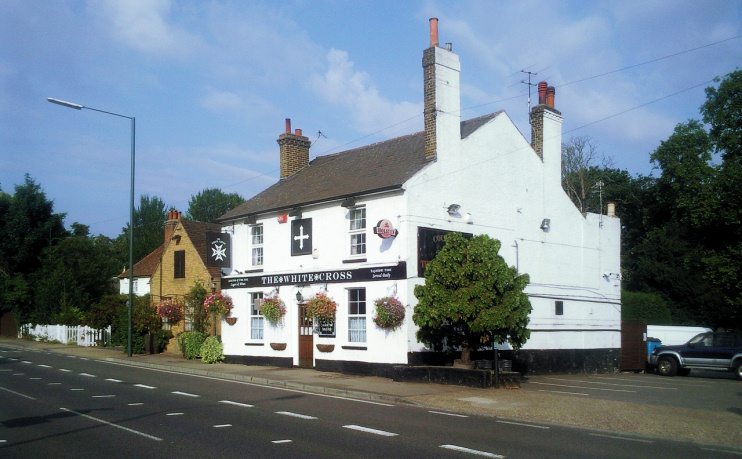 Signif­i­cant changes in North Cray seem to take place in short bursts about every two hundred years, so this history is divided into centuries.

Though the manor of Craie was assessed in Domesday Book, North Cray was first iden­ti­fied (as Northcræi) in Textus Roffensis, a manu­script compiled in the early 1120s. The mention came within a list of churches, so this is also the earliest record of the existence of St James church.

Edward Hasted records in his History and Topo­graphic Survey of the County of Kent that during the reign of Richard I (1157–99) “North Cray was become part of the posses­sions of a family, who were seated in the adjoining parish of Rokesle, now called Ruxley, and assumed their surname from it.” Sir John de Rokesle accom­pa­nied the king on the Third Crusade.

Nothing of note recorded.

The estate changed hands in the 14th century through the marriage of Agnes de Rokesle to Thomas de Poynings.

The Gatton family were resident in the area by this time, and their name is remem­bered in Gattons Way (which was built on the site of a house called Gattons, near the centre of the map below) and in Gattons Wood and Plan­ta­tion on Cocksure Lane (a road that takes its name from a grove called Cocks Shaw, presum­ably inten­tion­ally misspelt as a joke).

North Cray’s oldest surviving dwelling may have been built around this time or a little later – a hall house latterly known as Woodbine Cottage (but see below for its present location).

William Swetesyre was living in a North Cray tenement called Waletts in 1527, according to his will, in which he bequeathed the property to his younger son.

The manor of North Cray and surrounding lands passed to the Crown in 1538. Seven years later Henry VIII granted the manor to Sir Roger Cholmley, who soon sold it to Sir Martin Bowes, whose descen­dants retained it until about 1710.

In 1556 William Jordayne was granted woodland in Dartford and North Cray and his name lives on (in corrupted form) in Joyden’s Wood. In 1557 Cardinal Pole, the Arch­bishop of Canter­bury, united the parishes of Ruxley and North Cray, with the latter becoming the more dominant of the two.

The pair of weath­er­boarded cottages at 152 and 154 North Cray Road may date from as early as the 16th century. They were part of a group of three until the northen­most of them was destroyed in the Second World War.

Mount Mascal was built around the end of the century and stood on the hillside over­looking the North Cray Road, close to where Home Close Farm and Mount Mascal Farm are now.

The White Cross inn began life as Ye Brandy House and Ale House in 1729 and became the Red Cross the following year.

During the mid-18th century this part of the Cray Valley became a popular location for gentlemen’s retreats. The manor house was rebuilt as North Cray Place and Capa­bility Brown land­scaped its grounds.

Vale Mascal was built in 1746 for the Tash family, with grounds that included land­scaped walks along the River Cray, where tiny islands were created. The house was later the residence of the newly wed Sir Francis Burdett and Sophia Coutts. Its Gothic bath house was reputedly used by Charles Wesley as a baptismal font.

Woollet Hall was built in 1760 on the site of Waletts (see above). In 1771 the lord of the manor and his sister paid for five almshouses to be built on North Cray Road – three for the poor, one for the parish clerk and one for a schoolmaster.

Some new houses were built and the pub, St James church and North Cray Place were rebuilt (the latter for the second time) but things were generally quiet by the standards of the period, espe­cially later in the century, when devel­opers were more inter­ested in places nearer railway lines.

In 1935 the Red Cross inn was told to change its name as it appar­ently violated the terms of the Geneva Conven­tion protecting the symbol of the Inter­na­tional Red Cross Society. Pubs elsewhere called the Red Cross had to do the same. Here, the Red Cross became the White Cross, as shown in the photo­graph at the top of this article.*

In 1939 Gold­smiths College bought Woollet Hall and renamed it Loring Hall after the first warden of the college, Captain William Loring, who died at Gallipoli during the First World War. The college sold Loring Hall in the 1980s and it is now a privately owned care home. (Gold­smiths has since built a residence block called Loring Hall on its New Cross campus.)

Mount Mascal was demol­ished in 1957 and over the course of the next decade several parts of the hitherto well-preserved village were radically altered by municipal projects. The Bedens­field (or Bedens Field) estate was built, with 485 homes in a mix of houses and flats laid out around short closes and communal greens. North Cray Place, which had been wrecked by a bomb in 1944, was demol­ished in 1961 and replaced by the North Cray estate. The remaining parkland of North Cray Place became part of Foots Cray Meadows.

In 1967–9 most of the winding village lane and the prop­er­ties on its east side were oblit­er­ated by the A223 dual carriageway. Woodbine Cottage was disman­tled and later re-erected at the Weald & Downland open air museum near Chich­ester in West Sussex. Its timbers have been painted red, which seems to have been their original shade.

Apparently believing he was being blackmailed for homosexuality, Viscount Castlereagh committed suicide at Woollet Hall by cutting his throat with a penknife.