This page is a ‘stub’, as they call them on Wikipedia. It will be expanded when time permits.

A main-line railway station located at the corner of Liverpool Street and Bishopsgate, and the terminus for train services to the eastern and north-eastern suburbs, Stansted Airport and East Anglia 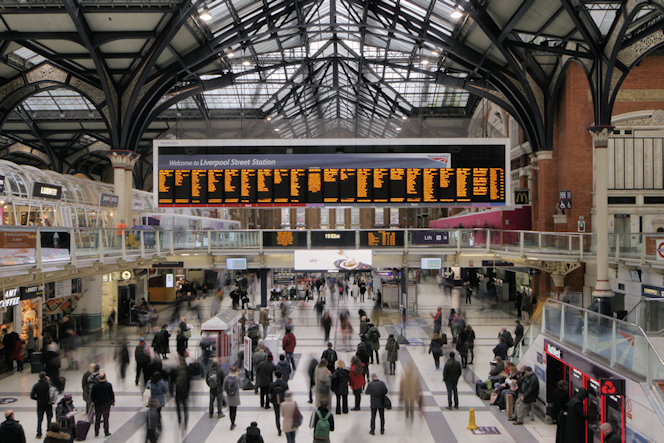 The street takes its name from Lord Liverpool, prime minister from 1812 to 1827. With so many other landmarks close by, only the immediate environs of the station are referred to as the Liverpool Street area.

Although the London to East Anglia route first began to operate in the 1840s, it was not until 1874 that Liverpool Street station replaced Bish­ops­gate as the terminus. It is London’s (and Britain’s) third busiest station, measured by passenger footfall.

Improve­ments made in the early 1990s combined the restora­tion of many original features with sensible modern­iza­tion, including a more spacious booking hall for London Under­ground services.

Scenes in the films Bridget Jones’s Diary and Mission: Impossible were shot in and around Liverpool Street station.