A station and a tangle of railway lines located halfway along Coldharbour Lane where Brixton meets Camberwell, deriving its name from Henry Hastings, first Baron Loughborough 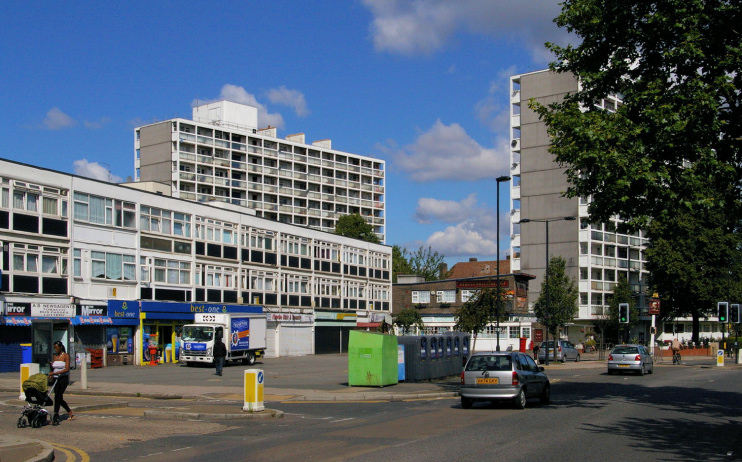 In 1660 Lord Lough­bor­ough acquired the old manor house of Lambeth Wick, which had extensive grounds occupying an area then known as Cold Harbour.

The house later became a boys’ school and was demol­ished in 1854, when the Lough­bor­ough Park estate was being laid out. The Victorian Lough­bor­ough Hotel (now converted to flats) occupies the site of the manor house.

By the end of the 19th century many of the area’s larger villas were being subdi­vided into flats. A number of these houses survive but much of the area’s housing stock was lost in a post-war demo­li­tion programme around Cold­har­bour Lane to clear the way for an inner London ring road that was never built.

The council flats of the Lough­bor­ough estate (shown in the photo above*) subse­quently filled the breach, notably the eleven-storey blocks around Barrington Road.

Lough­bor­ough primary school opened on Minet Road as a ‘fresh start school in 2002, serving the Lough­bor­ough estate. Around four-fifths of its pupils come from minority ethnic back­grounds and at least 28 different mother tongues are spoken.

The Evelyn Grace academy moved into its award-winning building on Shake­speare Road in 2010.

Three graffiti artists were killed by a freight train near Loughborough Junction station in the early hours of Monday morning, 18 June 2018.

* The picture of The Loughborough Estate, looking north-west along Loughborough Road is adapted from an original photograph, copyright Christopher Hilton, at Geograph Britain and Ireland, made available under the Attribution-ShareAlike 2.0 Generic Licence. Any subsequent reuse is freely permitted under the terms of that licence.