A network of Victorian terraces situated between Forest Gate and Ilford 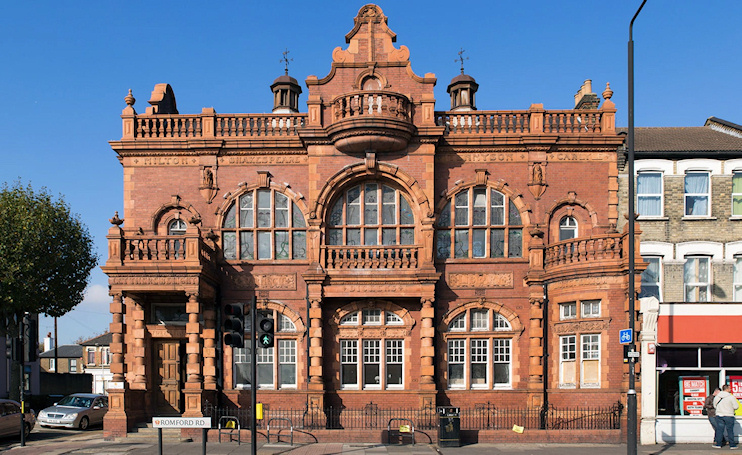 Most of this area was part of the manor of Little Ilford until it gained a separate identity following the opening of its station. The new suburb took its name from the manor house built around 1810 for the lord of the manor of West Ham on his Hamfrith estate. The house still stands in Gladding Road but has been much altered and converted into flats.

Manor Park station opened in 1872 and the Manor Park Cemetery Company bought the eastern part of Hamfrith Farm in the same year. Streets of terraced housing were laid out on the neigh­bouring fields from the 1880s. In Wood­grange Park, Cameron Corbett built to a higher standard than elsewhere in Manor Park, but kept costs down through effi­cien­cies of scale.

John Bethell, mayor of East Ham, persuaded the phil­an­thropist Andrew Carnegie to fund the construc­tion of a grand library, with a public hall on the first floor, which opened in 1905 at the corner of Romford Road and Rabbits Road. The library was designed by AH Campbell, the borough engineer.

Little Ilford’s Manor Farm was developed more cheaply as the Manor House estate after 1895. The street plan was deter­mined by the railway lines that cut across the district and almost all the housing was low-priced and short on space but with adequate facil­i­ties. Most of the original prop­er­ties survive intact.

Romford Road is a busy thor­ough­fare, lined with a wide variety of shops, most of which are inde­pen­dent and cater to a very local catchment area. Towards the Ilford end, the road is noted for its used-car dealers, though their number has declined in recent years.

In January 2013 a new library opened at 685–693 Romford Road. The Edwardian library building lay disused until its impres­sive rein­ven­tion as an arts studio, designers’ workshop and community space, which opened in late 2015.

Almost three-fifths of Manor Park’s popu­la­tion is of Asian descent – with origins in most parts of the Indian sub-continent. Islam is the main religion.

The entertainer Stanley Holloway was born at 25 Albany Road in 1890.

The actress Greer Garson was born at 88 First Avenue in 1904.

* The photograph of Old Manor Park Library at the top of this page is by Emil Charlaff.