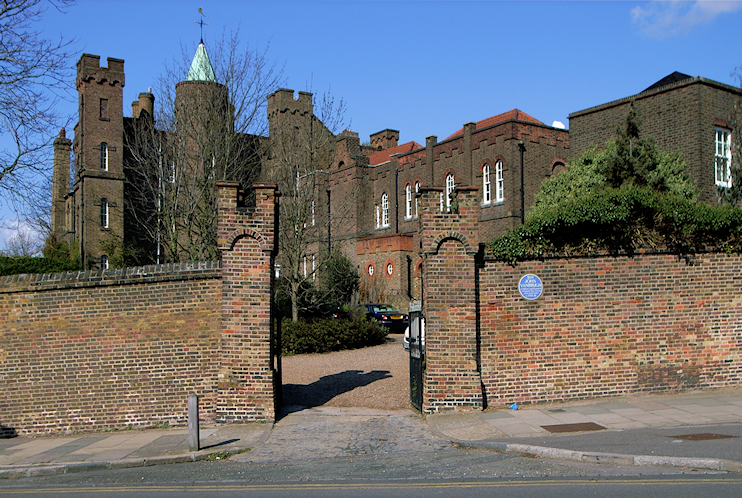 Despite evidence that the road once led to a turf maze in Black­heath, its name appears to come from 17th-century resident Sir Algernon May. Perhaps the maze influ­enced the respelling of ‘May’s Hill’.

Gravel extrac­tion dominated the east side of the road until around 1650. After the workings had been exhausted the land was let to small­holders, who were gradually eased out to make way for the homes of gentlemen, scholars and naval officers.

At the junction of Maze Hill and Westcombe Park Road are the brooding towers of Vanbrugh Castle, built around 1720 by the great dramatist and architect Sir John Vanbrugh, who also designed Castle Howard and Blenheim Palace.

Vanbrugh created a fortress-like complex of mock-medieval buildings, but only the centre­piece survived a spate of rede­vel­op­ment in the 1890s and 1900s that followed the opening of Maze Hill station in 1876.

In the first half of the 20th century many of the hill’s grand homes were subdi­vided and some were destroyed in the blitz. The elaborate Maze Hill House was demol­ished in 1932 and replaced by an estate of smaller prop­er­ties. The northern part of the locality is now dominated by munic­i­pally built resi­dences, including 1960s tower blocks.

The Black­heath Preser­va­tion Trust bought Vanbrugh Castle in 1976, restoring the fabric of the building and converting it into four dwellings.

Former slave Olaudah Equiano lived briefly at 111 Maze Hill. A pioneering abolitionist campaigner, Equiano published his autobiography in 1789. The book was one of the first personal accounts of slavery and became an international bestseller.

* The picture of Vanbrugh Castle at the top of this page is adapted from an original photograph, copyright Steve Cadman, at Flickr, made available under the Attribution-ShareAlike 2.0 Generic Licence. Any subsequent reuse is hereby freely permitted under the terms of that licence.