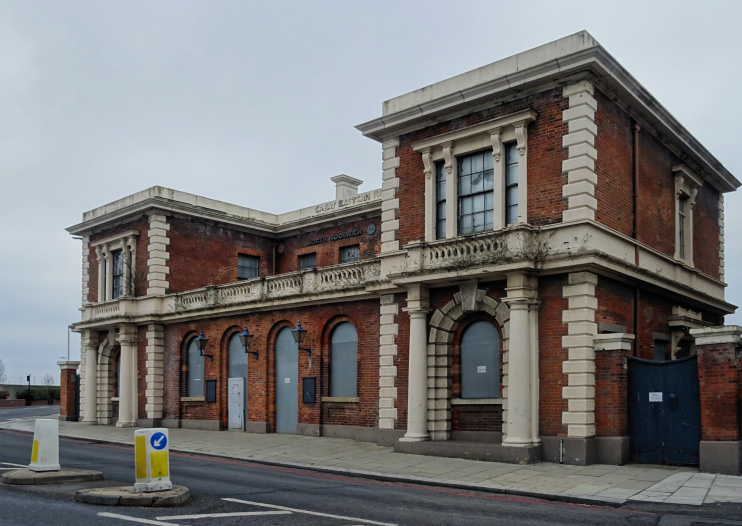 There is spec­u­la­tion that what is now North Woolwich could have been the original Woolwich, later lending its name to what became a larger settle­ment across the river. Wool from Essex sheep may have been landed or traded here by the Saxons.

North Woolwich was mentioned in Domesday Book of 1086 and for centuries was a detached portion of the county of Kent, and part of Woolwich parish. It consisted of virtually unin­hab­ited marshland, used only as water meadows, until the arrival of the railway in 1847 and the intro­duc­tion of a steam ferry service to the Royal Arsenal on the opposite bank of the river. Two years later its early growth halted when Woolwich itself gained a railway connec­tion, although the estab­lish­ment of a pleasure park in 1853 generated some day-tripper traffic.

Created by the entre­pre­neur William Holland, the North Woolwich Gardens boasted the largest dance stage in London. East Ham council took the park into public ownership as the Royal Victoria Gardens in 1890. The building of the Royal Docks, culmi­nating in the comple­tion of the King George V in 1921, brought factories and workers’ housing to North Woolwich. Like other out-of-the-way places there was the usual emphasis on noxious indus­tries. A new station opened in 1979 but closed in 2006. The previous station served for a while as a railway museum but closed in 2009. The photo at the top shows its state in 2016.*

In 1984 BT opened the London Teleport (orig­i­nally the London North Woolwich Earth Station) at Pier Road in North Woolwich. London’s first satellite earth station, it was designed to handle business services from the City and provide trans­mis­sion facil­i­ties for satellite tele­vi­sion and radio companies. The teleport is presently owned by Arqiva.

* The picture of North Woolwich station at the top of this page is modified from an original photograph, copyright Everyman Films, at Flickr, made available under the Attribution 2.0 Generic licence. Any subsequent reuse is freely permitted under the terms of that licence.